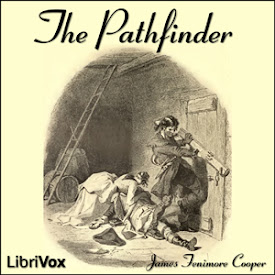 The Pathfinder - The Inland Sea

Natty Bumppo goes by many names: La Longue Carabine, Hawk Eye, Leatherstocking, and in this tale, The Pathfinder. Guide, scout, hunter, and when put to it, soldier, he also fills a lot of roles in pre-Revolution upstate New York. An old friend, Sergeant Dunham of the 55th Regiment of Foot, asks him to guide his daughter through the wilderness to the fort at Oswego where Dunham serves. With the French engaging native Indian allies against the British and the Yankee colonists, such a journey is far from safe.

Dunham has a plan in mind - to see his daughter Mable married off to the most redoubtable frontiersman and marksman in the territory, who is Pathfinder himself. But as an attractive and marriageable young lady, she draws other suitors. Then a military expedition contrives to put Sgt. Dunham, Mable, Pathfinder, and two other wooers into an isolated and dangerous garrison. Here treachery raises the stakes, and with the soldiers of the detachment shot down or captured, all of them must show mettle for any of them to escape with their scalps. (18 hr 42 min)

Everything I have heard narrated by Mark Smith has been extremely well done. I will admit that JF Cooper wrote in a style where people droned on, even in emergencies. But the action is pretty good, some love drama too, overall I found this very interesting. 5 starts for Mark Smith, 4 stars for the book.

I enjoyed very much.

Of the five Leather Stocking Tales, this is my second favorite. Cooper makes the Pathfinder even more real to the reader. I'm glad that the same reader read the whole book, and I liked his interpretation.

Good Sequel to "The Last of the Mohicans!"

Inspired by a rescreening of "The Last of the Mohicans" I checked out "The Pathfinder", which James Fenimore Cooper wrote as a sequel to "Mohicans." It has nearly all the same elements: Daniel Day-Lewis' character returns as the hero, he's got his Indian friend Chingachgook still, and once again there's the daughter of an English soldier to be protected. As in "Mohicans," it comes down to the valor and backwoods skills of Hawkeye/Pathfinder/La Longue Carabine and Chingachgook to overcome sneaky Indians employed by the Canadian French. Instead of a wholesale massacre on the trail, this time there's a retail one in an isolated outpost, but no less deadly for all that. And this time our hero is actively contending for the girl! If you liked "Mohicans" this is a listen in the same mode, read in lively fashion by Mark Smith.

Wonderfully read. A couple hesitations and mispronounced words, but I’d have made a lot more. I wish Mark Smith of SC did all the Leatherstocking Tales. With regard to the story itself, this is the last Cooper’s novels, and it’s a little smarmy. I’m not giving anything away by saying that Natty doesn’t understand romantic love and apparently Cooper doesn’t either. Chingachgook seems to deal with his son’s death a lot better in “The Last of the Mohicans.” If you read the Leatherstocking Tales as a whole, this book seems weird. By itself, it’s an Austen romance over the falls of the Ontario.

it seems that this book was written giving the authors picture of early years when warfare with American Indians. it tells both a gruesome story of that time and intertwining of love and hate. very well read. thanku reader.

I've listened to The Deerslayer, the Last of the Mohicans, and now this the third (in order of the chronology). This narrator has been by far the best. Thank you!

a story that stays with you

Great narration. Very well written and characterised by the author. The approach to showing good and bad in all is wonderful.