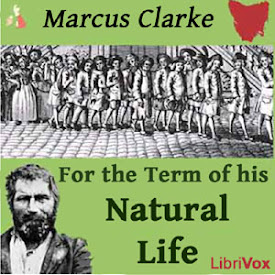 For the Term of His Natural Life

For the Term of his Natural Life, written by Marcus Clarke, was published in the Australian Journal between 1870 and 1872 (as His Natural Life), appearing as a novel in 1874. It is the best known novelisation of life as a convict in early Australian history. Described as a "ripping yarn", and at times relying on seemingly implausible coincidences, the story follows the fortunes of Rufus Dawes, a young man transported for a murder which he did not commit. The harsh and inhumane treatment meted out to the convicts, some of whom were transported for relatively minor crimes, is clearly conveyed. The conditions experienced by the convicts are graphically described. The novel was based on research by the author as well as a visit to the penal settlement of Port Arthur, Tasmania. (summary from Wikipedia) (18 hr 20 min)

I came across this book while listening to the writings of Mark Twain in which it was recommended. This is one of the great boons of LibriVox in that I came across this work which otherwise I would never have heard of. The story was well read by the volunteers and it gives an account of life in the penal colonies of Australia. I found the plot satisfying yet a bit confusing in places