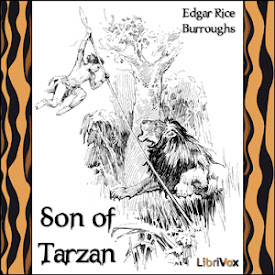 The Son of Tarzan

This is the fourth of Burroughs' Tarzan novels.

Alexis Paulvitch, a henchman of Tarzan's now-deceased enemy, Nikolas Rokoff, survived his encounter with Tarzan in the third novel and wants to even the score. (adapted from Wikipedia) (9 hr 50 min)

another great example of Sir ACD's magic. The movies made back in the 30's & 40's attempted to bring these stories from the book, yet failed, due in part, no doubt, to the rigors of acceptable behaviors in polite society. I love LibriVox

I actually listened to this thinking it was the second Tarzan novel and didn't suffer for it, in fact anyone who knows the premise of the Tarzan character can listen to this without having read or listened to any of the other Tarzan stories. The story is the epitome of the Pulp Genre, taking reality and giving it a little kick into the unbelievable, which makes it both exciting and fantastic. The Son of Tarzan follows, strangely enough, the Son of Tarzan as events roll over the Greystoke estate and Tarzan's son finds himself alone in the Jungle as a young lad. Adventure, fights, close calls, and even love come to the son of the great man as he swings from tree to tree. There are enough characters in this story both of the animal kind and the human variety to keep it interesting throughout. Good guys and bad guys all putting the love aspect of the story into jeopardy. This wasn't a story I couldn't put down, but it was one I kept coming back to. The reader was pretty good and did some interesting voices that I found amusing. Read more of my reviews of Free Audio at http://freeaudioreview.blogspot.com/

another great performance by RS

the story here is. Great and enjoyable as the earlier volumes of Tarzan (I actually like this about as well as the first and better generally than the second and third. Snell on is a wonderful reader and does an excellent job with character accents and voices to distinguish the dialogue for the listener. I'll probably take in the whole series.

everything you think Tarzan did from the movies, Korak does in this book

Enjoyed the story was surprised reader was from my home state.

A good story and a good reader.

One of the be of the ERB Trazan serires!

This book was wonderfully written! The amazing complexity of the books plot any the relative closeness of the characters, along with the animal's emotion and devotion to the human characters is awesome.