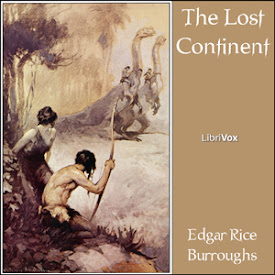 The Lost Continent (Beyond Thirty)

Originally published under the title of Beyond Thirty.

The novel, set in the year 2137, was heavily influenced by the events of World War I. In the future world depicted in the novel, Europe has descended into barbarism while an isolationist Western Hemisphere remains sheltered from the destruction. The title Beyond Thirty refers to the degree of longitude that inhabitants of the Western Hemisphere are forbidden to pass. (Summary from Wikipedia)

A bit different than other ERB, but a good 'read'. I know the Great War was a major event for our world, but never realized just how scary and cataclysmic it was perceived by people of that time. I think ERB does a good job of conveying the thoughts and feelings of his contemporary Americans via an Adventure Story. The reader has a pleasant voice and was not an issue for me, although I found her Aussie pronunciations to be comical.

ERB gives us a story much different from his usual writings. It definitely gives fodder for consideration of thr then-current fears of a great world war. It also furnishes, albeit under the surface, his conviction that the demise of the European under the onslaught of the African signalled an abrupt end to civilization and its accompanying technological advancements. The book certainly would not have suffered from additional explorations of the Eastern civilization. Its quick ending is OK, but it robs us of potential inventiveness by the author. The reader did a good job.

Not the strongest of Edgar Burroughs works... story was okay, the reading hmmmmm. how to put it tactfully. The reading was not the easiest to listen to with words mispronounced often, yet I'm sure it was her best effort and I don't want to make it sound all negative, it really wasn't. I enjoyed listening to the Australian accent... After consideration... I believe it was the pitch of her voice and not necessarily her reading.

Reader does not know the difference between "Calvary" and "Cavalry."

the reader did a good job, but I can't help but feel annoyed any time the opposite sex reads the part. write it sure. Don't have a female read a male character or vise versa. Just takes away from the emersion is all and becomes distracting.

Reader did a solid job. Intresting premise, story started out good but middle was kind of slow ended a little better. I like Edgar Rice Burroughs but this one is not as entertaining as other of his works.

An enjoyable story. I enjoyed it so much that I will go look for the sequel. The reader has a sexy accent.

Pretty standard Edgar Rice Burroughs, it was a short fun story, the reader did a good job.