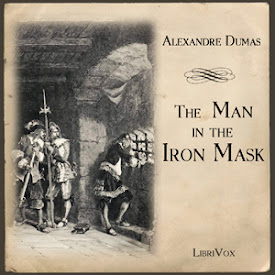 In this, the last of the Three Musketeers novels, Dumas builds on the true story of a mysterious prisoner held incognito in the French penal system, forced to wear a mask when seen by any but his jailer or his valet. If you have skipped the novels between The Three Musketeers and this, a few notes will bring you into the story:
On one side – Aramis, now a bishop and secretly the Captain-General of the Jesuit Order, who believes he has found a path to a higher honor – the papacy. Monsieur Fouquet, the vastly rich minister of finance, Aramis’ ally. Philippe, the identical twin of King Louis XIV, who grew up in ignorance of his pedigree, and whose surrogate parents were murdered on the king’s order and himself sent into the notorious Paris prison, the Bastille, there held in solitary confinement.
On the other side – King Louis XIV, selected as the twin who would be king by his mother, and who intends that his brother will never challenge him. Monsieur Colbert, first minister, who is jealous of Fouquet and plots his downfall.
Unaligned and in danger of collateral damage – d’Artagnan, now captain of the King’s Musketeers and so the king’s chief defender, who suspects plots running beneath the surface and who is trying to unearth them. Athos, now the Comte (Count) de la Fer and one of the most respected noblemen of France. Raoul, Athos’ son and vicomte (viscount), desperately in love with Mademoiselle de la Valliere, who the king has taken as his mistress. Porthos, grown extremely stout and happy as the Baron du Vallon.
Aramis discovers the hidden Philippe and hatches a plot to substitute him for the sitting king, putting Louis in Philippe’s cell in the Bastille. This even succeeds… for a short while. But Aramis has not reckoned with a man whose loyalty to the throne exceeds his own welfare and who disastrously reverses the plot. Now it is time for the plotters to scurry to cover, there to figure some way to recover their lost ambitions. (Summary written by Mark Smith.) (21 hr 1 min)

02 – How Mouston Had Become Fatter

05 – Where, Probably, Moliere Obtained His First Idea of the Bourgeois Gentilho…

07 – Another Supper at the Bastille

19 – The Shadow of Monsieur Fouquet

22 – Showing How the Countersign Was Respected at the Bastille

25 – In Which Porthos Thinks He Is Pursuing a Duchy

30 – The Inventory of Monsieur de Beaufort

39 – How the King, Louis XIV, Played His Little Part

40 – The White Horse and the Black

41 – In Which the Squirrel Falls, the Adder Flies

45 – The Ancestors of Porthos

The reader did great. I was so disappointed with the ending though. A lot of things left unfinished by the writer in my opinion.

The story was okay, but I think the title is misleading.

Mark Smith is a great narrator. However, the man in the iron mask, to me, is a pretty horrible story. I didn’t like it very much.

Saddened by this last book in the series. Well read by Mark Smi

quite good but I'm disappointed that the brother was never mentioned again.

I found myself Incredibly dissatisfied by the ending.

what such an interesting book. I expected this to be similar to the Hollywood version, and was intrigued by all the subplots and twists. The story was made far more enjoyable by the readers' animations of the characters. I was also It was even more enjoyable in the fact that there was only one reader for the entire book,so I did not have to struggle through many accents and different characterisations characterizations. This reader is by far my favorite, with an excellent enuncitation, and meter. A truly enjoyable book and a superb reader. Thank you.

narrator did a great job, I was able to follow along. I haven't read any of the other musketeer books. I was expecting this one to focus on the man in the iron mask, but only the first like 1/3 of the book are spent on that story. The rest of the book wraps up the lives of the musketeers if you have been following along in their life's journey.