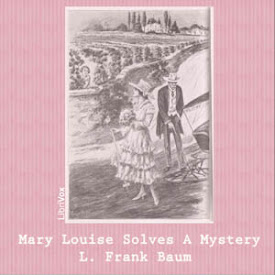 The Bluebird Books is a series of novels popular with teenage girls in the 1910s and 1920s. The series was begun by L. Frank Baum using his Edith Van Dyne pseudonym, then continued by at least three others, all using the same pseudonym. Baum wrote the first four books in the series, possibly with help from his son, Harry Neal Baum, on the third.

The books are concerned with adolescent girl detectives— a concept Baum had experimented with earlier, in The Daring Twins (1911) and Phoebe Daring (1912). The Bluebird series began with Mary Louise, originally written as a tribute to Baum's favorite sister, Mary Louise Baum Brewster. Baum's publisher, Reilly & Britton, rejected that manuscript, apparently judging the heroine too independent. Baum wrote a new version of the book; the original manuscript is lost.

The title character is Mary Louise Burrows. In this, the third book of the series, Mary Louise and her Grandfather happen upon a mysterious pair of Americans whilst travelling in Italy. Jason Jones is a failed artist, and his companion is his daughter, Alora, an heiress. When the girl is kidnapped, truths stemming back to the time of her parents' marriage are brought to light by Mary Louise and her friend Josie O'Gorman. (Summary by Wikipedia and Sibella Denton) (4 hr 10 min)

25 - Mary Louise has an Intuition

young girls who love a mystery will certainly love this one

Another great adventure for Mary Louise and company. Great reading!

Excellent Reader! A fun story and interesting mystery involving sweet young girls. I thoroughly enjoyed it. Thank you to the wonderful reader

This one, though predictable, left me angry at the end.

Alora is a poor young lady who stumbles across Mary Louise while she is traveling abroad. Mary Louise scents a mystery though when Alora's father suddenly announces that they are leaving the country, moving again as they have done many times in the past. What could he possibly have to hide or run from? Time to call in Josie O'Gorman for some help! Reader is excellent and the story was excellent. Enjoy!