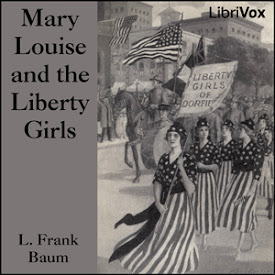 Mary Louise and the Liberty Girls

The Bluebird Books is a series of novels popular with teenage girls in the 1910s and 1920s. The series was begun by L. Frank Baum using his Edith Van Dyne pseudonym, then continued by at least three others, all using the same pseudonym. Baum wrote the first four books in the series, possibly with help from his son, Harry Neal Baum, on the third.

The books are concerned with adolescent girl detectives— a concept Baum had experimented with earlier, in The Daring Twins (1911) and Phoebe Daring (1912). The Bluebird series began with Mary Louise, originally written as a tribute to Baum's favorite sister, Mary Louise Baum Brewster. Baum's publisher, Reilly & Britton, rejected that manuscript, apparently judging the heroine too independent. Baum wrote a new version of the book; the original manuscript is lost. The title character is Mary Louise Burrows.

In this, the fourth book of the series, Mary Louise and friends form a group dedicated to supporting the soldiers in World War I, and she brings Josie O'Gorman in to spoil a treasonous plot against the government. (Summary from Wikipedia and Sibella Denton) (4 hr 17 min)

09 - Gathering up the Threads

14 - The Professor is Annoyed

This book was a bit more of a commercial for war support and bonds than a real story. It's okay for the most part but gets a bit thick here and there. Reader is excellent so still worth a listen, but its not as good as the other Baum books in this series.

through today's eyes, its a hard read with too much politics. I do find it amusing how much Mary and Grandpa Jim profess to hate traitors when the entire first book was Jim shielding a traitor.

although this particular book was not as strong as the others, I really hope to see more from the bluebird book series