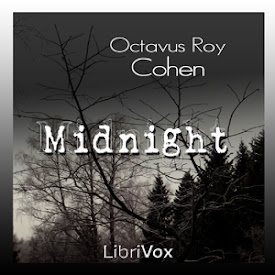 The crime seemed to have lost itself in the sleety cold of the December midnight upon which it was committed. The trails were not blind--there were simply no trails. The circumstances baffled explanation--a lone woman entering an empty taxicab; a run to a distant point in the city; the discovery of the woman's disappearance, and in her stead the sight of the dead body of a prominent society man--that, and the further blind information that the suit-case which the woman had carried was the property of the man whose body was huddled horribly in the taxicab. (Summary from the text) (6 hr 19 min)

Out of the Storm

The Suit-Case is Opened

Carroll Has a Visitor

A Talk With Hazel Gresham

The Woman in the Taxi

"And Nothing But the Truth--"

The Problem is Solved

A so so story read fairly well by Roger Moline. This is one of Moline's better recordings!! There is more expression in his voice and less sing song. But he does yell the dialogue. His voice has such great timbre. I wish I enjoyed it more. I appreciate the hard work and time put in though. The story itself is very dated and unsurprising. But I'm running out of free mysteries!!!!

Another absolutely excellent job by the unparalleled RM.

good but I wish the cab driver was more involved in the end. at least tell us he went home to his warm home.

Extraordinary idea that rich equals good & innocent/pardonable & how detectives will protect them. Did I miss it or is the lowly but honest cab driver still in custoofy? Still, apart from the tedious but useful Evelyn, a likeable bunch of characters. Well read.

The story was OK , not sitting on the edge of your seat kind of suspense and even to I love Roger Melin as narrator, I don't think he did as good a job on this one

not very suspenseful but

a good listen . Especially since the reader Mr Melin has blossomed, dropping the sing-songey style of earlier readings. Great voice! so now Im looking forward to his future readings.

Another new favourite reader. An intriguing how did they do it even if by the end you're left a bit confused as to who did it.

So glad that one of my favorite readers led me to this author. Highly recommended. Enjoyable plot, well developed characters, and well read. Thank you