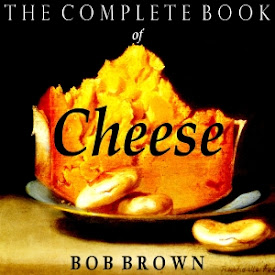 The Complete Book of Cheese

Bob Brown, after living thirty years in as many foreign lands and enjoying countless national cheeses at the source, returned to New York and summed them all up in this book.

Born in Chicago, he was graduated from Oak Park High School and entered the University of Wisconsin at the exact moment when a number of imported Swiss professors in this great dairy state began teaching their students how to hole an Emmentaler.

After majoring in beer and free lunch from Milwaukee to Munich, Bob celebrated the end of Prohibition with a book called Let There Be Beer! and then decided to write another about Beer's best friend, Cheese. But first he collaborated with his mother Cora and wife Rose on The Wine Cookbook, still in print after nearly twenty-five years. This first manual on the subject in America paced a baker's dozen food-and-drink books, including: America Cooks, 10,000 Snacks, Fish and Seafood and The South American Cookbook. (Summary from the book jacket) (9 hr 42 min)

Its initial charm fades in the later chapters

The book is, at the beginning, enjoyable. Later, it strikes an appendix of cheese types which is suprsingly meditative, and if listened to in twenty minutes stints would presumably maintain this feel the whole way through. At a single listen, the long list of types of cheese ceases to be interesting, then ceases to be meditative, then becomes annoying enough to switch off. It shows the vast talent of the readers that they can breathe life into such material for so long. It's a four star book if you are interested in the subject, and you know to stop at Chapter 15.