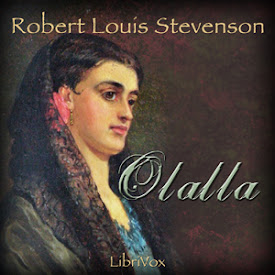 "Olalla" was a "shilling shocker" written for the Christmas season in 1885, just before the publication of Stevenson's Dr. Jekyll and Mr. Hyde. The nameless protagonist of this Gothic tale, a wounded soldier, goes to the Spanish countryside to recuperate. He finds himself enthralled by the beautiful Olalla, the daughter of his hostess, whose family conceals a terrible secret. (Summary by Elizabeth Klett) (1 hr 39 min)

I became aware of this novella via a Kickstarter from a university group to republish it and create an audiobook, which I thought odd because it’s still in print, is already available as part of an ebook, and there’s a Librivox edition. The group describing it bill it as a vampire novel that predates Dracula, but that’s an oversimplification of the story, or at least it chooses a single, superficial interpretation which is likely to be commercially appealing. It’s in the Gothic style, and is more about mood that plot, so the novella format fits it superbly. Stevenson takes his exercise in style as far as he can, and then truncates it before it starts to drag. Recommendable to those who like Gothic stories, aren’t bothered by character types which later become clichés, and won’t feel disappointed if the “vampiric” reveal is weak. This review originally appeared on <a href="http://gcbooks.wordpress.com/" rel="nofollow">book coasters</a>.

I like the story very much though it remains ambiguous and somewhat of a disappointing nature at the end. The fear of degeneration subsequent to the spread of Darwin's theories can be clearly traced in the plot. Ms. Elizabeth Klett is one talented and unique reader. her voice is so soothing yet intriguing at the same time. Thanks for this piece

Maybe it went over my head with so many implications; or possibly I interpreted too deeply. They're crazy so just leave them alone?

I'm a bit confused with the curse. I can't tell if it's a physical curse, or a psychological curse. The details of the curse descripdescription is a bit vague. One characters action makes you think you understand it completely. However when Ollala explains it your like 🤔maybe they are just crazy. It reminds me of a very popular 3 book series that was made into 3 films. Except in that book the main character was a girl. Anyway good book and great readers.

Gothic horror at it's best

Beautifully written and read. If you enjoy gothic horror stories Olalla is for you. The mysterious Spanish beauty is plagued by a family curse, but exactly what does this curse do to our tragic lady and her kin? You'll have to listen to find out.

I enjoyed this gothic horror story, though the ending seemed a bit of a letdown -- nothing really new developed. Interesting and atmospheric though. A fine, clear recording by the same Librivox reader who recorded Carmilla (which this story reminded me of).

Read as usual marvelously by Elizabeth Klett. Thank you! A beautiful story, leaves WAAAAY too many questions open. I understand why so many people said they felt as if the ending were missing. ... its open. I assume.

19th century gothic tale in the style of Mysteries of Udolpho and Fall of the House of Usher. it's enigmatic, but don't look up an interpretation before you read it. & don't read it before you go to sleep!