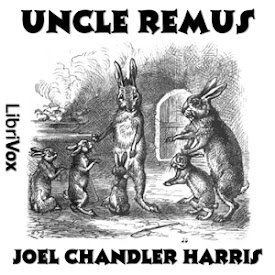 Many readers will already be familiar with Uncle Remus’ favorite animal characters – Br’er Rabbit and Br’er Fox among them – and some of the popular tales concerning them. (To this day, “tar baby” as an expression for a particularly sticky situation that is almost impossible to solve, has passed into the English language and common use.) Even people who have never read any of these tales will know exactly why you don’t throw a rabbit into a briar patch, mainly because Walt Disney produced his first movie ever to use professional actors with animation, called “Song of the South”, based on the Uncle Remus tales.

Joel Chandler Harris, a newsman in Georgia, grew up listening to folktales told by the local black population. Later, he published his version of these tales in a series of stories printed in the “Atlanta Constitution.” The tales of, and by, Harris’ chief character Uncle Remus, an old black man scrabbling to make his living in the post-Civil War South, were extremely popular and widely read. Harris’ use of innovative spelling to give the reader a sense of the black dialect was considered novel.

While this is not a book that will pass a current political correctness test, due to its use of labels for black folks which have gone out of polite conversation, Uncle Remus is a largely sympathetic look at post-war plantation life. Uncle Remus himself is a warm, folksy man of good humor and dry wit, and after finishing his animal stories, the remaining sayings and tales are a moment of history frozen in amber. (Summary by Mark) (6 hr 12 min)

4 - 2 - Turnip Salad as a Text, A Confession, Uncle Remus with the Toothache

4 - 3 - The Phonograph, Race Improvement, In the Role of a Tartar

# 4 - 5 - His Practical View of Things, That Deceitful Jug, The Florida Waterme…

# 4 - 6 - Uncle Remus preaches to a Convert, As to Education, A Temperance Refo…

Well done, Mark! Thank you for a great reading! My Dad used to read Uncle Remus to us. He could do the accent so well. Then he got Parkinsons disease and lost his facial expressions and story telling ability. I have played your recording for him as we traveled to therapy. He has enjoyed it very much.

A well-done recording of a very entertaining group of stories.

I am most impressed with the reading by Mr. Mark Smith. His 'southern negro' voice is wonderful. It is as though I were sitting there with the boy, listening to the old gentleman tell the tales. Thank you for doing the reading, Mr. Smith.

Mr. Smith has a wonderful reading voice. These Uncle Remus stories were read to me as a child at bed time. So nice to discover them again as an adult. It's a little bit of Southern history.

Thank you so much Mark! Me and my little daughter listen to these stories at bed time. We both love them.

Glad to have found this book! Now l'd like to find. Song of the South!

Another tour de force performance by Mark Smith. I found these stories entertaining. Uncle Remus is a wise old benevolent former slave still living on or close to the plantation. He uses the n-word repeatedly and that is uncomfortable and inappropriate in today's society still struggling to come to grips with racial inequality. The stories do give an impression of what the post-war South must havebeen like in some situations. Over all the stories are interesting and entertaining but the whole book should be approached from a careful historical perspective.