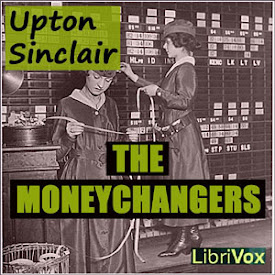 A story of white collar crime and intrigue told from the point of view of Montague, a member of the privileged class of New York. Montague witnesses the manipulation and upset of the stock market by high financier Dan Waterman who is motivated by revenge. Waterman's character is loosely based on J.P. Morgan. (Summary by Margaret) (6 hr 28 min)

This is yet another one of Sinclair's great works. Well read by Margaret Espalliat. One note: The 'Waterman' character was, in fact, not "loosely based" on J.P. Morgan, but simply a substitution of names by Upton Sinclair - Waterman = J.P. Morgan - though for obvious reasons Sinclair could not directly state this. But research reveals that, despite revisionist history, this is indeed true. Thank-you.

With such a dearth of "social novels" that are

available in the public domain I find Sinclair's "personal agenda" as one reviewer calls it, to be a breath of fresh air. Sinclair's " point of view might have a smidgen of validity"?! no it is the totality of validity, the truth, for hellish working conditions and the Fat Cats they worked for Sinclair was a democratic socialist and his book "the jungle" did help in some social reforms. I come from a working class lineage and the one horror story herein in the mills, I have heard many a like stories from great uncles and younger in age. My father was one of the first to move up to lower management in the factory milieu. The manufacturing plant he worked in had its own electrical power generating plant. He told me of some lethal work accidents there. god rest his soul. he was lucky enough to live 20 years after retirement. Do research on the history of the working class by historians. Edith Wharton was a millionaire and hobnobbed with the high and mighty. She was no socialist but was very critical of her class. for example read the Bunner Sisters or Fruit of the Tree by her. I worked a few years after high school in a factory. we made massive locomotive engines. even in the late 1970's there were deaths there and i saw one of two bad accidents, one a man's arm torn off. In the US we buy from manufacturers of everything from tooth brushes, underwear, to cruise ships. It's over there now that workers are treated horribly the way we the workers were endangered and exploiting our blood sweat and tears for the sake of the robber barons of the early 20th century. As usual, Margaret Margaret Espaillat performs another fine reading. It's a good bet that Sinclair last line of the book from the protagonist "i'm going into politics"(to try and reform our corrupt morally and economically type of capitalist system). Sinclair did run for Governor of California. Even though Louis B Mayer through his media conglomerate made propaganda films that were lies about Sinclair. Sinclair still just barely lost.

This novel by Upton Sinclair takes us into the underhanded dealings of bankers. Sinclair's personal agenda sometimes overpowers his story, but considering this was written before the Great Depression, his point of view might have a smidgeon of validity. The reader, Margaret, reads this book very well, with clear, precise diction and expression. Well worth listening.

Continues the adventures of Sinclair’s hero Montague in Manhattan, but with much more plot and much less description of luxury than in the first volume, Metropolis. Well read.