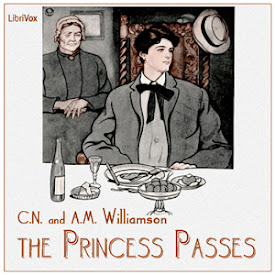 An American heiress nicknamed the Manitou Princess (after her daddy's richest silver mine) is devastated to find that her fiancé only loves her money, so she does what anyone might do: she bolts for Europe, dons male attire and sets out on a walking tour of the Alps. Though professing hatred of all men, she soon falls in with a just-jilted English lord, aptly named Monty Lane, who is attempting to walk off a broken heart of his own. The Princess Passes presents the ups and downs of their alpine relationship through the unpenetrating eyes of Lord Lane.

Co-author Alice Livingston, of Poughkeepsie, New York, mentions in her memoirs that she sailed for Europe after a boyfriend tried to shoot her. In London she met literary editor Charles Williamson and began writing for the story magazines of media mogul Lord Northcliffe. At one point she found herself scribbling six serials simultaneously, on the income from which she and Williamson married. She later spun some of her husband's detailed descriptive notes made during their motor-trips abroad into a string of bestselling novels involving automobiling, then a novelty

. The central romantic action of The Princess Passes recalls comic situations of Shakespeare's cross-dressing heroines and is bookended by automobile-themed sequences as the narrator and friends (hero & heroine of the Williamsons' first novel, The Lightning Conductor) motor south through the magnificent, peaceful mountain passes of pre-World War I Europe. (Summary by Grant Hurlock) (11 hr 36 min)

Mercedes to the Rescue

Pots, Kettles, and Other Things

In Search of a Mule

The Wings of the Wind

The Making of a Mystery

The Scraping of Acquaintance

A Shadow of Night

The Path of the Moon

A Man from the Dark

A Little Game of Flirtation

The Little Rift Within the Lute

There Is No Such Girl

The Revenge of the Mountain

The Vanishing of the Prince

The World Without the Boy

The Day of Suspense

Switzerland for the armchair tourist

First of all, reviewers don’t have to pass judgement on others because they don’t happen to care for the genre. Why mention it in the first place? Who cares? I liked this odd story and I’m glad I listened in. The narrator’s boring monotone was maddening but I solved that problem by increasing the speaking pace. Then it was tolerable. The story was mostly travelogue, the relationship clearly homosexual. Her transformation mattered little. Story somewhat shallow because of sketchy character development in contrast to the vivid descriptions of the landscape.

Beautifully told story of two people trying to get over being jilted. They each end up taking a long walking tour through the mountains, to get over their loss, and when they happen to meet up, they take an instant dislike to one another, which gradually grows into a warm friendship as they travel in together. Wonderful descriptions of the sights along the way. Clean.

so enjoyed this book .almost travel with them.not to be rushed.

Travel enthusiasts will be satisfied, those interested in the history of the automobile will be delighted, and anyone searching for a bit of a romantic farce will find that here.

totally worth a listen

offering contructive criticism, scifi would suit readers voice better. It's so strange, when he's reading the announcement part, he does not sound like this. No, I couldn't do it any better. I may try to listen another time or another reader.