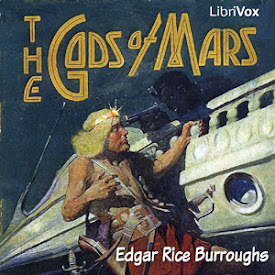 The Gods of Mars

The protagonist, John Carter, with his proficiency in hand-to-hand combat and flirtations with beautiful alien women, could be said to have set the mold for later influential icons like Captain James T. Kirk and James Bond.

At the end of the first book, A Princess of Mars, John Carter is unwillingly transported back to Earth. The Gods of Mars begins with his arrival back on Barsoom (Mars) after a ten year hiatus, separated from his wife Dejah Thoris, his unborn child, and the Red Martian people of the nation of Helium, whom he has adopted as his own. Unfortunately, John Carter materializes in the one place on Barsoom from which nobody is allowed to depart: the Valley Dor, which is the Barsoomian heaven. (Summary from wikipedia)

03 – The Chamber of Mystery

06 – The Black Pirates of Barsoom

10 – The Prison Isle of Shador

21 – Through Flood and Flame

Turn on the Librovox (J. D. Webber) recording of The Gods of Mars only if you intend to forget eating and sleeping for the next 8 hours. Think Die Hard action and tempo with the intensity of a Lethal Weapon movie. Oh.., heard some bitching about J D Webber. Grow up. Yeah if I knew Mark Nelson edition was available I might have listened to that edition, but JD did a wonderful job.

Love the book; the reader not so much.

While I have not made it to the fabled 6th chapter, I am hopeful that I can do so as JD's diction, meter, and pronunciation of common words that are clearly unfamiliar to him so detract from an otherwise excellent story. In fact, I find myself reflexively correcting his mispronunciations aloud. Nonetheless, my complaints are muted by the the adage that "you get what you pay for" and by the indisputable fact that this fellow volunteered his time to make the story available to us. That effort is, in and of itself, laudable.

Review: Book: The Gods of Mars Auther: Edgar Rice Burroughs Reader: JD Weber Location: South Shores of Lake Superior { Honestly though why add this, it does not help the listener in any way by knowing where in the world this is read from. } Opinion: I have several issues with the reading of this book, but before I list them let me state that I am *still* listening to the book as I like the story! With that said, there are several vocal stumbles throughout this reading. It may be that this is Mr. Weber's first time reading a book and recording it, it may be jitters, I do not know. Words are stumbled over, and often times mis-pronounced. These are ok, and by no means a show stopper. The biggest issue for myself, here comes *my* opinion, is that Mr. Weber is recording this reading in a room that has no acoustic dampening materials. I would venture to guess that the room is a relatively small study with hardwood floors which amplify spoken words and leads to a distracting vocal echo with certain syllables. The harshest of these syllables are the "S" sounds when they happen to come at the end of a word. The acoustics of the room enhance the whistle of Mr. Weber's otherwise pleasant voice. For me it is simply a matter of recording in the wrong room versus Mr. Weber himself being a poor reader. Again, with this said, Mr. Weber does a brave, and often superb job at diction while reading, with the bulk of the stumbles and vocal timbre and tempo often suffer when one of these stumbles occur. I have been able to notice that while the reading continues, the quality of Mr. Weber's diction improves, and I am expecting the book to finish strong. Small Rant directed at gl1200phil . First off, just because someone has a complaint about someone, using caps and calling names is not a sign of a more intelligent poster. People are allowed to voice their opinions as this is a place for *user reviews* not a dictatorship where only one view is allowed. End of small rant.

The Important Part - Compliments and Gratitude: I love having things to listen two while I work! Since my hands and eyes are occupied by the computer, I've lost a lot of my reading time I grew up accustomed to having :3 Ignore beyond unless you read all the other comments: To the particular ranter who darkened my emotions just from exposure to your caps on the page, most of those that pointed it out were still quite polite and complimentary, only one on the page was not, so your intended-to-be-noble defensive return should have been properly directed. A better defense of the reader might have been: No one speaks primly and properly 100% of the time. Reading flawlessly would require practice of each chapter before recording, as even words one is accustomed to can trip you because you're reading someone else's thought process and manner of speech different from your own. Ultimately meaning free listeners would get books far less quickly. And honestly, even with comments, no one actually cares, especially since there's none less than half to full marks on the page. As for pauses, most were page turns. Being one to read out loud often, I know it takes a while with a fresh book before the brain starts naturally absorbing the last sentence before a flipped page so that reading continues flawlessly. You can even hear it half the time if your volume's up. PS: Capiche, laughingly, isn't any more US slang than most of the rest of the jumble that is American English. It is in fact, the thing all the comments are about, a mispronunciation (ha ha) of capisci, an Italian verb in a present tense conjugation of capire. Quite a lot of the words we know and spell as they're listed in our dictionary are spelled and said differently in the countries they came from. PSS: Why do I bother reading comments...I wish I could tell my brain to stop reading when it drifts down the page.

Complaints of the readers are by INGRATES!

I am so sick of all THE WHINERS! How DARE YOU complain about the readers!?!? If folks like Mr Weber didn't SELFLESSLY devote their time and talents to this endeavor, THESE FREE, HEAR THAT? F-R-E-E, resources would not be available for you! For the record. I thought Mr Weber did a FINE JOB!!! IF YOU DON'T CARE FOR A READER'S VERSION YOU HAVE A NUMBER OF OPTIONS: 1. Volunteer and READ THE BOOK YOURSELF. I doubt many whiners will. Complaining about something free like this, is a trait of the selfish person. Definitely not the type who would do something for others! Ever hear the saying, "Don't look a gift horse in the mouth"?? 2. Try here at Archive.org or Librivox, to find a different reader. Many books have multiple versions. 3. Do a Internet search for other sources... some you may have to pay to download. Is the audio book starting to look better yet? 3. The Gutenberg Project or archive.org will have a text version available to read online or you can download it for free. 4. Go to a library and check out the book or a audio book. 5. Go to a BOOKSTORE and BUY what you're looking for. 6. You won't die if you don't get to hear that book. FORGET ABOUT IT and find a different one. There are plenty more to choose from. My eighty five year old mother occasionally has to remind me. "If you don't have anything nice to say about someone, don't say anything at all!" (C'mon Mom I'm talking about Rush Limbaugh et al...) I'm giving this a FIVE STAR rating, due to Mr Weber's ability to get some of the people to show their true colors! and it was a great read and story... A word of US slang (yep it really is.. no such word in Italian. I was fooled.. Look it up!) is apropos> CAPICHE?

Ghetto is not the right word for describing mispronunciations such as "ax" for ask and "excape" for escape. GHETTO is just a nice, clean, even complimentary (pretend-like) label for mispronunciations common to one sub-category of Americans, namely the very poorly educated. To call it ghetto is to ascribe the error to just one segment of the population. The OLD word for is not admissible in the court of public opinion. It is verboten, in fact, and sidling over to "ghetto" as a sly substitute reflects our frustration, mostly, but is actually fooling millions of people. These mispronunciations are NOT slang. They are ignorant mispronunciations and shouldn't be considered "ghetto" one bit, because the little white famblee who lives two trailers down from your mom's brick facade split-level 3 bedroom bath-and-a-half house are guilty of these same mispronunciations. Next thing we know you label-givers will have "nukular" down for a ghetto pronunciation--not a mispronunciation, mind you, but only a different way of talking, basically slang. Pffft! Shame. Where will you all draw the line? You've changed the spelling of "led" to "lead" and worse, because you barely read except online, and you all teach each other the same mistakes. We don't need a Ministry of Misinformation or a sanctioned office worker to continually rewrite history on pain of severe punishment. You all are doing the work voluntarily. (Not literally YOU all, but a general catch-all, hypothetical "alla y'all.") For me, hearing an audiobook narrator say "excape" hurts my ears so bad I have to either brace myself in order to continue the book, or give up on it. It's so hard to figure out how anyone reaches adulthood without having been told, and told, and told that "excape" is WRONG, WRONG, WRONG.

after a low start, it goes up to professional story telling.

I must say I was quite disappointed at first: the reader starts with an uncertain reading pace, often stumbling and pausing when it's not opportune. Of course that happens, but none of those initial mistakes had been edited out for the final listener. Anyway, with my great surprise and delight, after the first 6-7 chapters the precarious reading style becomes steady and very well paced, all the stumbles gone or otherwise edited out. Then after some more reading it improves further, introducing all those features which are only common to professional and seasoned readers such as: character voices, circumstantial pacing and voicing(tuning the pace and the voice to suit a sudden gush of action in the story for example), and a great passion which binds and enraptures the reader to the story. That's awesome! Well done JD. As for the story itself it's far better than the first chapter of the series(a princess of mars). Definitely a must listen for those who started this series: four stars.

not quite equal to Princess if Mars

Not quite equal to "Princess of Mars" (my humble opinion) but a very good listen as well. And both books are better than the movie which as usual lost a huge part of the story given up trying to recreate with a camera what a great authors words have created with the mind's eye. Many thanks to the authors and others who make these books available. And more thanks to Mom, Aunt Jean, and my first grade teacher Mrs McGlauphlin for teaching me early phonics and the other secrets to enjoying reading. What a true blessing!! Guess that's a little much but I felt like sharing my gratitude.bI hope it makes someone smile.