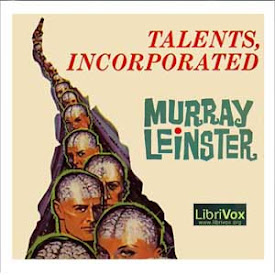 Bors felt as if he'd been hit over the head. This was ridiculous! He'd planned and carried out the destruction of that warship because the information of its existence and location was verified by a magnetometer.

But, if he'd known how the information had been obtained--if he'd known it had been guessed at by a discharged spaceport employee, and a paranoid personality, and a man who used a hazel twig or something similar--if he'd known that, he'd never have dreamed of accepting it. He'd have dismissed it flatly! (Summary from the Gutenberg text) (6 hr 9 min)

one of my favorites

This story is about a colonized world that is doomed to be taken over by a terrible regime. I would recommend this to any X - men fan.

A very good read. I'm surprised that during the golden days of b&w TV, this wasn't made into a movie. Then again, they did think Star Trek was too cerebral. This story more than makes up for, "operation outer space." My only detraction is the admiral's cowardice should have earned his decommission. Heck, were I king, wouldn't have asked for, nor accepted his resignation; I'd have forced him into one-on-one combat with the strongest most deadly soldier (who is order to hospitalize his opponent) and let the admiral offer surrender to the pre-commissioned soldier. Thereby forcing the condition he wanted for his subordinates on him.

This is the first time I've come across this story. I can't believe I missed it after all of these years of reading science fiction. This is the stuff of real classic science fiction but with a very interesting wit about it. I listened to it because it was read by the incomparable Mark Nelson but the story really won me over on its own. Highly recommended to anyone who enjoys Classic sci-fi.

read so well, some deadpan humour and the not of the norm thinking processes of Morgan really got me hooked to see where the ideas were going. An excellent read and one of my favourites to date.

I would have Mark Nelson read me bed time stories every night.

This is the third Murray Leinster story I've listened to, one after the next. it's brilliantly read by the wonderful Mark Nelson. I really enjoyed most of it, and it's got some great ideas (and Leinster's habit of slipping a recap in every so often was helpful too) but good grief, King Humphry is literally the worst monarch in literature! I'd love a reboot of this tale where they rise up and depose his dithering, baleful, hopeless self and put someone more competent in his place. maybe a sack of potatoes or something. I'm pleased to know Leinster wrote many more Sci fi tales and I hope that many of them are read here by Mark Nelson and I'll be happy listening in for a long time yet.

Reader is, of course, is great. But the story is great too. One of my favorites is the story of the reluctant hero and this is one of the best. only a very few science fictiony plot twists so the story shines through as it should.

A fun sci fi romp! It has some obtuse characters at times, but they blend to make a fun plot. Very entertaining. Mark Nelson is a gifted reader who makes even bad books something I will listen to and good books a sheer pleasure