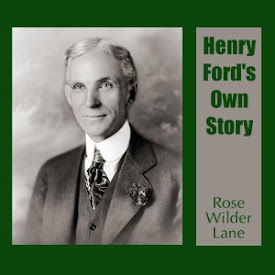 Rose Wilder Lane was a newspaper reporter, free-lance writer, political activist, and the daughter of Laura Ingalls Wilder, author of the "Little House" series of popular children's books. In this biography of Henry Ford, Ms. Lane worked directly with Ford to tell his story from his birth to his founding of the Ford Motor Company and his use of modern assembly lines to mass produce his cars. (Summary by Lee Ann Howlett.) (4 hr 27 min)

05 - Getting The Machine Idea

09 - The Lure Of The Machine Shops

13 - Eight Hours, But Not For Himself

14 - Struggling With The First Car

20 - Clinging To A Principle

22 - Automobiles For The Masses

Rose Wilder Lane was the daughter of Laura Elizabeth Ingalls Wilder, who wrote the <i>Little House</i> series. In 1915 Rose was 29 years old and working for the <i>San Francisco Chronicle</i> when she gave a series of informal interviews with Henry Ford. These articles became the basis for a book-length biography called <i>Henry Ford's Own Story</i>, published in 1917. Rose's 1915 biography was only the second about Ford ever published at that point, yet it was still early in his career, he would live another 30 years yet. It's unfortunately a mythologizing account with factual inaccuracies, Ford himself was unhappy with it. The personal details of Ford, his machines and history become secondary to Rose's fictionalization for the sake of story. She did the same thing in biographies of Charlie Chaplin and Jack London (who were also unhappy with her treatments). In her stories, the same simple heroic romance is retold of life as a successful struggle against adversity and its inevitable reward. It makes for good literary fiction of the Dicken's fated universe type - the good guys win and the bad guys get their due - but as biographies of well known and famous living people, they were a mixed blessing, a astute reader could see there must be more to the story left unsaid. There have been many biographies of Ford, some of them pretty good. While this one is enjoyable enough, I can't really recommend it, even Ford himself didn't like it. At its best it is an example of how Ford was mythologized from early on into a populist hero, and how he was viewed by the world circa 1915/17. It might be appropriate for some juvenile readers. Whatever the faults of Rose's book, the <a href="http://www.archive.org/details/henry_fords_own_story_1006_librivox" rel="nofollow">LibriVox reading</a> by Lee Ann Howlitt is very well done and pleasant to listen to, I hope she continues reading more books at LibriVox! [STB | 062010 | 758]

Kept me company on a cross country trip. The story was good enough, but the reader's lack of real excitement stole some of the energy from the read. One in awhile she would totally miss the intended emphasis on certain words or phrases. STILL, I would recommend the book as a good intro to the early life of Ford

Great reader and book! Things we now enjoy as minimum wage, safety on job, teaching emigrants English language, 8 hour work day were all introduce by Henry Ford (don't know if he was the first one to introduce it) before it was common practice. He genuinely cares about his employees.

Rose wilder Lanes writing is a joy that brings memories of her mother's writing style. That early factual americana. The book portrays Ford as always loving the common man. I think I believe it. The book is a young adult level but makes for a pleasant quick overview of the businessman's life.

This biography of Ford was interesting, well-written, and mostly enjoyable. Thanks to Ms. Howlett for her time in narrating it. Her voice sounds a bit funny for a little while (almost Southern, but not quite!) but I was soon used to it. Overall it was a fascinating book.

What a beatyfull story by a great man. Why are we not teaching our children about true heroes such as Henry Ford. Thank you to those that took the time to share Henry Ford biography with the world.

A Man of incredible talent, determination and goodness

I have a much better and admirable view of Henry Ford. Excellent narration- I will look for her other narrations.