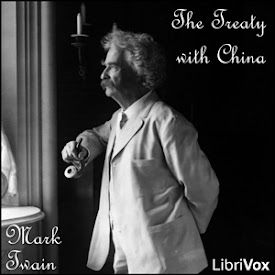 "A good candidate for 'the most under-appreciated work by Mark Twain' would be 'The Treaty With China,' which he published in the New York Tribune in 1868. This piece, which is an early statement of Twain's opposition to imperialism and which conveys his vision of how the U.S. ought to behave on the global stage, has not been reprinted since its original publication until now." (the online, open-access "Journal of Transnational American Studies" published it in the spring, 2010). (Introduction by Shelley Fisher Fishkin, Twain scholar and Director of American Studies at Stanford University, used by permission)
(Transcription by Martin Zehr for the Journal of Transnational American Studies, American Cultures and Global Contexts Center, UC Santa Barbara - http://escholarship.org/uc/acgcc_jtas) (0 hr 46 min)

the treaty with china

it's good in educational story.. thanks..