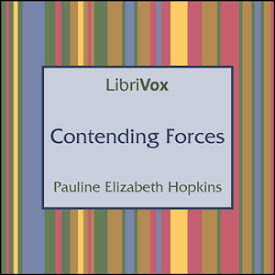 Pauline Elizabeth Hopkins, despite an impressive record of productivity and creativity as a novelist, playwright, short fiction writer, editor, actress, and singer, is an African-American woman writer who has essentially been consigned to the dustbins of American literary history. Though contemporary with Frances Ellen Watkins Harper, Charles W. Chesnutt, and Paul Laurence Dunbar, Hopkins is only now beginning to receive the kind of critical attention that Harper has enjoyed for a slightly longer period and that Chesnutt and Dunbar have always had. Hopkins had work published in several genres, but her reputation today rests primarily upon Contending Forces: A Romance Illustrative of Negro Life North and South, the novel she published in 1900. (Introduction by Margaret) (9 hr 1 min)

A Retrospect of the Past

The Days "Before the War"

"Coming Events Cast their Shadows Before"

"Love Took up the Harp of Life"

Luke Sawyer Speaks to the League

Will Smith's Defense of his Race

"So He Bringeth Them into their Desired Haven"

Contending Forces by Pauline E. Hopkins. Read by the fine voice of Margaret Espaillat. Espaillat has a lovely mature voice and reads at a human pace. She has one of the best voices of american or Canadian readers for Librivox. Let us never forget the evil treatment of human beings from sub Saharan Africa.However in this book we are informed of the abolitionist movement in England. And by the late 19th century the Boston region being a haven of hope for African Americans. I was dissapointed that the horrible crimes committed against a British former slave owner who moved from Bermuda to North Carolina where the viscious murders and crimes occured, was not further developed upon. One of the most evil Holacuasts ever committed in human history was King Leopold of Belgium's working, torturing, amputating, beheading to death 10 million Africans in the Congo in the late 19th century

Margaret Espaillat does an excellent job reading this important 1900 novel. The transitions are very good, the diction is always clear, and the dialect is accurate without embarrassing. I can't thank her enough.