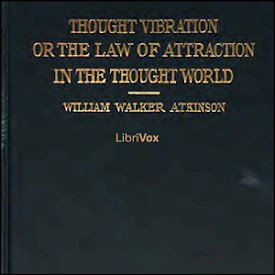 Thought Vibration, or The Law of Attraction in the Thought World

William Walker Atkinson (December 5, 1862 – November 22, 1932) was an attorney, merchant, publisher, and author, as well as an occultist and an American pioneer of the New Thought movement.
Atkinson was a prolific writer, and his many books achieved wide circulation among New Thought devotees and occult practitioners. He published under several pen names, including Magus Incognito, Theodore Sheldon, Theron Q. Dumont, Swami Panchadasi, Yogi Ramacharaka, Swami Bhakta Vishita, and probably other names not identified at present. The works published under the name of William Walker Atkinson generally treat themes related to the mental world, occultism, divination, psychic reality, and mankind's nature. They constitute a basis for what Atkinson called "New Psychology" or "New Thought". These titles include Thought-Force in Business & Everyday Life (1900), Thought Vibration or the Law of Attraction in the Thought World (1906) and Practical Mental Influence (1908).
Due in part to Atkinson's intense personal secrecy and extensive use of pseudonyms, he is now largely forgotten, despite having obtained mention in past editions of Who's Who in America, Religious Leaders of America, and several similar publications - and having written more than 100 books in the last 30 years of his life. His works have remained in print more or less continuously since 1900. (Introduction from Wikipedia) (2 hr 15 min)

Excellently read. My heartfelt gratitude to the reader of this timeless LOA book.

This review is an edited version of ones I’ve left on the pages of the other two books in this review... I read this book along with “The science of getting rich” by Wallace, and “Your invisible power” by Behrend. I was trying to understand the importance of the mind as we go through life. This was about five years ago and although I got the gist it, I thought all the books were a waste of time. Fast forward to present day, I’ve taken my time listening and re-listening to all three books and they finally make sense! I think books like these take a bit of studying or at the very least, paying very close attention. To me, all three of them helped explain each other and reinforced their ideas. They all helped me to understand the power of the mind. The writers have small varying opinions as to whether to share your ideas/mental image with a close group or keep them a secret, but I think that’s up to you. You decide what works for you and you believe it wholeheartedly. Whatever you think and believe it to be is what it will be.

This is the third book of Mr Atkinson that I have read or listened to. Never a dull moment. There are nuggets of wisdom liberally dispensed throughout. You need to listen multiple times and often, and practice. ☮️🙏

a simple and motivating text

This book wasn't necessary ground breaking in terms of the ideas it puts forth. however it does go further than some pop science examples of the law such as "the secret" into grounding the ideas in relateability. My education is in human psychology and I found it easy and interesting to draw parallels between the rules of law and the basics of neuroscience. the simple mantra of "neurons that fire together wire together"that we all learn in the first year of our degree seems to be reiterated multiple times in different and interesting ways. he even touched on topics such as learned helplessness and dysfunction cognition patterns. I would say that without the background knowledge of psychology and also of chaos magick this might come across as quite basic or wishy washy. but as someone actively studying both is was great to listen to in the mornings as a reminder that my day is only going to equal what I put into it, inspiring me to get off the sofa and go live and manifest the life I want.

Best New Thought movement books I've read or listened to yet. This is the source material for later law of attraction teachings which, unfortunately, are highly distorted and misleading because of it. This guy was clearly truly inspired, knew what he was talking about, and explains it clearly in logical fashion. The narration by this volunteer was top of its class. One negative I must mention because modern minds may take issue; this author makes a comment in the book that references a common view of the time - a view of the evolution of races, with some being superior to others as a whole. This racist view is stated as if it's an obvious fact, unfortunately. It's not the point of the book and it's only one line, but it is worthy of objection none the less. He was a man of his time and culture despite having wisdom in some areas of life, and that culture was wrong and morally lacking.

"The Secret" Was Derived from THIS Book!

It's slow going at first, but you'll be sold by the third chapter. If "The (so-called) Secret" resonated with you... this book will BLOW YOU AWAY, as it seems to me that the marketers of "The Secret" almost certainly obtained their primary ideas, and even the title "The Secret" itself, from this very book. This isn't a book that'll prove beneficial to you if you only listen passively. Suggestion: If you listen while multitasking, make SURE you are still ACTUALLY LISTENING, taking-in and remembering the content. Have a pen and paper within reach at all times because you'll want to take note of various suggestions. If you're willing to go all-in and follow-through on the proposed "exercises", you'll absolutely experience an immediate and positive change.

You've heard of The Secret, right? The Secret reads like an outline and customer review collection compared to this book. This is the instruction manual you were hoping for. There are a couple incidents of racism and a misogynistic undertone, but don't let that detract from the powerful message. The reader is very nice and reads with conviction. I'm going to hear his portrayal of the whiney parts when I read the actual book. 😂 It can be annoying to hear the edits much louder than the original reading, but if you are truly focused on the message, they become less noticable. This book is such a masterpiece that I'm buying several copies for family and friends.

I have given this book one star as I was unable to continue past a few minutes of listening as the reader is poor. He has an odd style of reading which detracts from the subject matter and so that is why I’ve given such a low score. Incidentally, I did try to listen to another book by the same reader on this app and had to switch that one off too. If the gentleman is their retained reader then I shall delete the app!