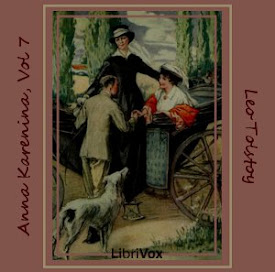 Anna Karenina tells of the doomed love affair between the sensuous and rebellious Anna and the dashing officer, Count Vronsky. In Book 7, Levin, in town for Kitty’s confinement, finds himself drawn to the corruptive influence of Moscow society. Stiva again presses Karenin to divorce Anna, while Anna, driven by jealousy, becomes increasingly irrational towards Vronsky. (Summary by Mary Anderson and MaryAnn) (4 hr 19 min)

TOLSTOY's characters depicting the full range of human frailties and weaknesses are beautifully described against the background of 19th century Russia with its political and economic turmoil. Anna's slow decline to mental instability and her shocking death as well as the description of her cold heartless husband Alexei, with his dead eyes his blueveined hands his unchangeable habits ànd his relentness wish to reach the highest office is government are amongst the best portraits painted for us by LEO TOLSTOY. I would prefer the story only read by one reader instead of a mix of gooď and hardly understandable reàders.

This Anne-Marie Lady reader is good the best so far of all the Ladies Readers for this magnificent TOLSTOY masterpiece...But not as good as Phil GRIFFITHS. GRIFFITHS is just excellent not only with the accent but with the tone in the best pure English sonority. He is a good one more star ahead of David COLE Who also have the beautiful English accent but not the magnificent tone of GRIFFITHS

I know these people. My husband is Levin, his ex-wife Anna. Sin's consequences cannot be alleviated by today's society any more than yesterday's. I hope for a turning to God by every Anna, rather than an embrace of despair.

Section 7...I wanted to kill Anna, just to get over with her dang jealousy and back and forth, does he love me, no he doesn’t. A good picture about the sad life of women in this time period.

What a heck of a place to end this installment. Great reader and great story.

Wonderfully read. The reader's voice is very mellow and suiting!

Much better than other chapters, only a couple terrible readers!

The story draws near its end. Well read.