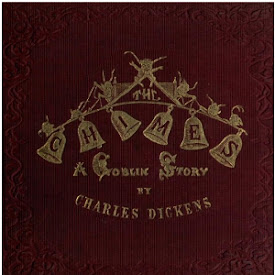 The Chimes: A Goblin Story of Some Bells that Rang an Old Year Out and a New Year In is the second of Charles Dickens' Christmas books, published in 1844. Its contemporary setting is the "Hungry Forties", a time of social and political unrest, and the book has a strong moral message. It remained popular for many years, although its fame has since been eclipsed by that of A Christmas Carol, the first of the series.

Our hero Toby ("Trotty") Veck is a poor but hard-working man, whose beloved daughter Meg is due to marry on New Year's Day. Trotty, who is appalled by newspaper reports of crime and immorality, is further depressed by his encounters with the rich and influential Alderman Cute and Sir Joseph Bowley, who make him feel that the poor have no right to exist in society, and his daughter has no right to marry. Trotty hears messages in the chimes of the church bells, which lead him to visit the belfry at night on New Year's Eve... (Introduction by Ruth Golding) (4 hr 18 min)

Ruth is a fabulous reader of one of the darkest Dickens tales I have read. Trotty is put down, down, down by those higher than him in society and by his own thoughts. The tale gets darker and darker to the point that I would have turned anyone else but Dickens off. I endured to the end marveling at Dickens narrative and appreciating redemption in the end.

As a reader, Ruth is a real artist. She does more than read. She takes a great work of literature and shows it in its best light. I was not familiar with this story, but was captivated by Dickens' characters - exhibiting the best and worst in people. Thank you Ruth for sharing your gift!

Fabulous performance by Ruth brings this story alive in the imagination! She sings, does voices and narrates in a beautiful British accent! One of my absolute favourites!

Without doubt one of the finest voice recordings offered by LibriVox. Ruth Golding's performance is of great beauty and professional in every way. Her sung interpretation of the church bells is outstanding. Sound quality is very high, with no pops, hisses or noise cleaning artefacts. And having completely run out of adjectives I'll just say thank you Ruth! TheBookworm (Manchester, UK)

What a fabulous reading of this story - she really sent shivers down my spine!

The story is a good one, but the reader makes it a great one.

Darker than the better known Christmas Carol but well with a listen. good readi…