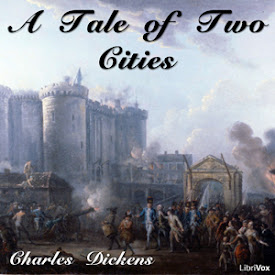 A Tale of Two Cities

A Tale of Two Cities (1859) is a historical novel by Charles Dickens; it is moreover a moral novel strongly concerned with themes of guilt, shame, redemption and patriotism.

The plot centers on the years leading up to French Revolution and culminates in the Jacobin Reign of Terror. It tells the story of two men, Charles Darnay and Sydney Carton, who look very alike but are entirely different in character.(Summary from Wikipedia) (14 hr 59 min)

II.VIII: Monseigneur in the Country

II.XII: The Fellow of Delicacy

II.XIII: The Fellow of no Delicacy

II.XXIV: Drawn to the Loadstone Rock

III.VII: A Knock at the Door

III.VIII: A Hand at Cards

III.X: The Substance of the Shadow

III.XV: The Footsteps Die Out For Ever

A Tale of Two Cities

One more book that truly deserves many stars, written by master writer Charles Dickens. I am ashamed to say that I never read it before in its printed form, and appreciate LibriVox's audio books even more for it. The work of the readers was great, no exceptions, as far as I am concerned. Everyone in his or hers own style gave depth and the appropriate degree of emotion to the portion they were reading, and some were truly magnificent. Thank you all of you readers, from an appreciative listener. Thank you, LibriVox.

A Tale of Two (or More) Narrators

The book is great, of course. Most of the narrators were good, some especially so. A couple left quite a bit lacking. I was very disappointed that in the pivotal scene at the end, the narrator read far too quickly and had poor pronunciation.

The book is wonderful as we’ve all come to expect the pen of Charles Dickens to produce. The reading was good. Only one or two chapters were read with some static interference and it was difficult to understand. 95% was read clearly and brilliantly, giving life and character to each word.

The story is every bit as good as I had always heard. Most of the readers are good, and none terrible. One thing I fail to understand, though, is how some readers consistently mispronounce words. I understand that they are volunteers, and not everyone could do as well as even the mediocre readers, but I wish every one who records a book or chapter would read each section through at least once before recording and look up the correct pronunciation for any words that aren't familiar. Still, to those reviewers who complained about there being so many different readers, yes, it's distracting and sometimes disappointing--but where do you expect Librivox to find enough people who will volunteer to read 800 pages out loud, let alone do it like a practiced professional?

There are three books here. The first one introduces many of the characters, and sets the tone and contrast of England and France. It is a slow start, but maintains interest with powerful descriptive language that paints a vivid image of the world unfolding. The second book is when things start to get very interesting, with the French revolution being an important and dramatic theme. By the third book, you are hooked. Overwhelming suspense between the chapters make 'A Tale of Two Cities' slow start well worth your time.

A Literary Masterpiece, Not Illustrated by This Execution

I am forced to agree with the other reviews. While the story is long, it really grabs the imagination in the second half and the multiple readers, with differing enunciation for various words and names, seemed to muck things up a bit. Though each reader did a superb job, it is my opinion that a single reader would have been much more fluid

wow. only a few complaints about recording quality (when there is two voices at the same time for an instant)besides that the readers did well. its a slow start but i was captive by mid way.

Most of the readers did well but if I had had my way Andy Minter would have read the whole book. He was excellent. His reading made the scenes he read come alive for the listener.