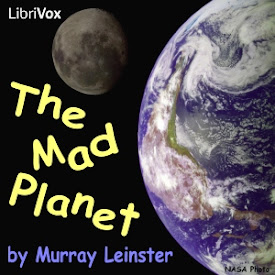 It is 30,000 years following dramatically changed climate conditions on earth which had let massive amounts of carbon dioxide belch from the interior of the planet into the atmosphere. Over the millenia this would have quite devastating effects on life as it had once been known. Much of the human and animal population would not survive the climate change, and indeed those few humans who did survive knew nothing of all which their predecessors had learned and built. Indeed, they knew not even of their existence. On the other hand insects and fungi would flourish over time. (2 hr 45 min)

I am not sure if I liked this story or not. Burl is a typical man who wants to impress his lady, only in this savage world of the future, he doesn't have much to do that, yet. His desire to impress her leads him on the quest of his life, and takes the poor dying civilization back into the right direction. Depressing and interesting at the same time, Mad Planet was part of a trilogy created by M Leinster. I am going to look up the other two parts, this story does feel a bit like it is missing parts of the story line. The reader was excellent, he always does a great job. Thanks!

The story itself wasn't bad. [possible spoiler] It kind of reminded me of the JM Auel series watered down, and thrown into the future. Man's regression to begin his climb again, was a bit disconcerting, however, it is plausible. The one detraction I have, is how he missed the fact spiders have 8 eyes. Also, it'd've been interesting (gross) to mention how flies vomit up their stomach onto their food, then suck it back in.

Scary even if impossible

This book and The Red Dust were conflated and somewhat rewritten as The Forgotten Planet. I think Leinster's idea was that if insects were the size of mammals and birds, humans wouldn't stand a chance against them. Unfortunately, he gets almost all of the science wrong; but then, that's why it's called science fiction. The descriptions of insect behavior are truly hair-raising and scary.

The writing invokes an elaborate picture of 'forrest' life that reminds one of a prehistoric world of giant mushrooms and insects in a constant flurry, as a guy starts to understand, survive and think his way in the wildlife. Very well written and read!

This is just a shortened version of The Fogotten Planet (which was very good) . I guess this is his way of showing his ecological conscious of man destroying the earth . I think the original was better (showing man trying to build planets).

Life in a brutal, insect dominated world. One man journeys though places he's never been and comes back to his tribe changed. Great reading. Loved the random scientific names added to describe flora and 'fauna'.

Sad and also hopeful tale by a very good author. Coupled with Roger Melin's usual excelence in narration I believe it deserving of the famous five stars. Thank you.

Don't get your hopes up

Cranky old cracker with a gun

It's a great book but has nothing to do with global warming. The person making that claim should be ashamed.