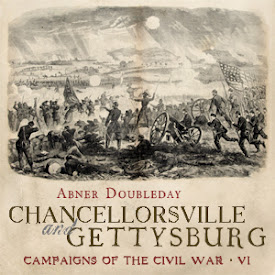 Abner Doubleday began the Civil War as a Union officer and aimed the first cannon shot in response to the bombardment opened on Ft. Sumter in 1861. Two years later, after a series of battles (including Antietam, where he was wounded), Doubleday took over a division in the Army of the Potomac's 1st Corps.

These are his memoirs of service in two of the War's great campaigns. At Chancellorsville, a very promising start made by General Hooker against Lee's Confederate forces fell to a defeat when, in Doubleday's estimation, normal and prudent precautions against surprise in the heavily-wooded battlefield were not carried out; he also seemingly apologizes for Hooker's lack of leadership during the battle as a result of his having been stunned by a cannon ball hitting the post against which he was leaning.

After Chancellorsville, Hooker was replaced as Army Commander by General George Meade. Doubleday describes the curious circumstances that led the two opposing armies to meet at Gettysburg in Pennsylvania. When Doubleday's superior, General John Reynolds, was killed by a sharpshooter on the first day's battle, he took over the 1st Corps and fought it well against converging Confederate divisions that badly outnumbered him. The Corps was forced by battle losses to retire, but its desperate fight bought the time needed for Union reinforcements to pour into Gettysburg and thus prevent a defeat in detail.

General Howard of the XIth Corps replaced Doubleday as the senior commander on the field, and mistakenly wrote to Meade that 1st Corps had routed after practically no fighting. Thus, when Meade arrived, he removed Doubleday from command of 1st Corps, replacing him with a more junior general from another Corps. The snub would embitter Doubleday against Meade. This book is in part Doubleday's revenge, as he picks apart Meade's indecision after the battle was essentially won, with the repulse of the famous Pickett's Charge. In his view, Meade could have won the war at that moment. (Summary by Mark Smith) (6 hr 46 min)

1-06 - Sickles Fights His Way Back; Arrival of the First Corps

1-09 - Preparations to Renew the Conflict

2-7 - General Retreat of the Enemy

Gen. Abner Doubleday, NOT the inventor of baseball but a Union leader who seemed to be in some of the hottest spots in the war between 1861-63, wrote the above narrative shortly after Gettysburg where he served temporarily in command of the 1st Corp (Reynolds was acting as the Left Wing commander until his death) until his relief following an unjust report by Gen. O. O. Howard, commander of XI Corp and for much of the day, LW commander being the senior commander on the field until he was relieved by Gen. Hancock on the orders of Gen. Meade. Doubleday was not considered to be a good commander, but some modern historians believe July 1 to be his best day in the Army of the Potomac. That aside, IMO he wrote some of the most honest and insightful reports I've read. This report explains much of what happened at Chancellorsville and Gettysburg. He explains how and why the XI Corp was caught unprepared and fell victim to Jackson's flank attack and explains Hooker's failures to continue the offensive. Never forgiving Howard and Meade for what he felt was an unjust demotion (he returned to division command while a division commander from the III Corp, Gen. Newton, assumed command of the I Corp) he's harsh on both of those generals actions both during and after Gettysburg, especially Meade's failure to catch Lee in Maryland and destroy the AoNV. I think you'll enjoy listening to this reading.

An excellent history for those who have a basic knowledge of the battlefield. Very detailed including orders given, how they were followed and how the actions effected the outcome. Very well read.

very well read, a shame the content was so dry.

Great book in conjunction with other tittles on this category.

These presentation make the ride to work pass quickly!