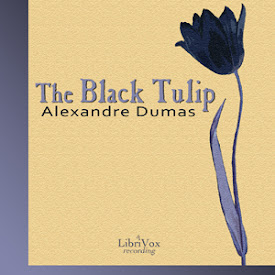 The Black Tulip, written by Alexandre Dumas père and published in 1850, is a historical novel placed in the time of Tulipmania in the Netherlands. The novel begins with the 1672 politically motivated mob lynching of the de Witt brothers and then follows the story of Cornelius van Baerle, godson of Cornelius de Wit. Cornelius Van Baerle has joined the race to breed a truly black tulip – and to win the prize of 100,000 guilders, as well as fame and honour. As he nears his goal he is jailed and then of course rescued – by the beautiful Rosa, daughter of the jailer. (7 hr 34 min)

05 - The Tulip-fancier and his Neighbour

06 - The Hatred of a Tulip-fancier

20 - The Events which took place during those Eight Days

22 - The Opening of the Flower

26 - A Member of the Horticultural Society

29 - In which Van Baerle, before leaving Loewestein, settles Accounts with Gryp…

I see now why Alexandre Dumas' novels in my daughter's jr. high school library (many long years ago) were all abridged. I watched Game of Thrones from start to finish, much of it more than once, loving it all, and never seeing violence that even approached the sadistic cruelty, the vicious hammer-blow details, the gratuitous prolonging of things, that I endured in the first 4 chapters of The Black Tulip. I stopped being in suspense halfway through the 4-chapter scene and hollered at the story being read to me, "Get ON with this! Those two men are still in the same danger, nothing changes, it goes around, but then it rolls back again, full circle, repeatedly! What is the hold-up for the love of God!" I've never experienced from book or movie the carrying of a thing so far beyond the range of what is needed to propel a fine adventure story forward, while making sure the bad thing that happens and just how very bad it was is clear and effective. If I'd been reading it, I'd have known where to stop. An audiobook is trickier. I listened way too long. I should have heeded the warning I was getting from how long it was taking to get to the point, and turned it off sooner. Furthermore, historically speaking, I doubt the accuracy of the awful scene. I think it's almost entirely out of Dumas' head, no other source, and that those first chapters of The Black Tulip aren't even as "realistic" as The Man in the Iron Mask or The Count of Monte Cristo. Alexandre Dumas, ageless, beloved storyteller, but no historian. He's been plenty criticized for overuse of artistic license (for a buck). I listened no more after chapter 4, so my opinion can't do the job of a review, but the violence in these chapters is a full story's worth for me, with tons to spare. Take warning: "Good heavens, Monseigneur, what is going on there?" the officer whispered. "Something very terribly, to a certainty," replied the other. You could say that. (The READER was superb!)

Chock Full of All the Good Stuff

The summary above unfortunately gives away the ending - don't read it! :) This little-known work of Dumas should be read as often as The Count of Monte Cristo or The Three Musketeers. It's suspenseful, harrowing, and very satisfying. Set during the ascendancy of William of Orange in the midst of tulip fever, one doesn't know whether William is a good guy or a bad guy. But we do know that Cornelius is the hero, and Rosa is the heroine. And the queen of all is The Black Tulip. Excellently read. Highly recommended.

Brutal but not "awful"

It's not historically accurate, certainly not. However, complete historical accuracy would accomplish little, other than diminish the story that Dumas has spun! The brutality is a legitimate concern, albeit not the most serious of concerns. Dumas is not famous for being gentle to his characters, instead he kills many of them off in various ways, some heroic, some sad, and some, as has been said, brutal and gruesome. However, it is a story about a lynching, lynchers aren't famous for being all goody-goody to those they are in the process of actually lynching. The sort of people who'd participate in a lynching simply aren't the gentle sort, just as a general rule! As for the monotony, Dumas's stories can seem boring unless you're able to see them in a certain light... view them not as you would based on modern standards for length and wordiness, instead base them on the standards of Dumas's time! Books around then were not generally 1-hour reads. I personally find the subject matter very creative, the only serious book I've ever heard of concerning a race to create a black tulip! G'day, all.

Alexander made sure to have plenty of captivating twists. The overall "love story" had more humor than a romantic love about it. The way he captured the "lovers" in this story actually made me root for them to the end. He captured the villian so nicely that at the end, when the man lied through his teeth, I actually was moved to wishing I could reach into this story and slap the liar most soundly! Do so recommend this to anyone interested in a little piece of history mixed with a cute fictional story line.

The reader did a very nice job on this story which starts out with a grisly true-life event and then becomes a fairly sweet romance centering around the secret growing of the elusive black tulip at a time and place where tulips were supremely celebrated. I loved the characters of Rosa and Cornelius. She's a very modern heroine and he is the perfect, nerdy damsel-in-distress. This was good fun.

If read anonymously, I venture to say that no one would attribute it to Dumas. Yet it is certainly worthy of his abilities even if it is not in his usual style. The reader is new to me, but she has immediately sprung into the top flight with such as Nicolas Clifford and Simon Evers. An enjoyable and educational read.

Another great reading of Alexandre Dumas. I had never read one of his books until I found the Count of Monte Cristo on Librivox and since then have listened to nearly all the titles that have been recorded on here. This isn't quite as thrilling of story as the three musketeers books but still a good listen.

I enjoyed this book which was like a fairy tale apart from the first couple chapters. Alexandre Dumas knows how to write a story full of suspense! The reading was quite good which made the book all the more enjoyable!