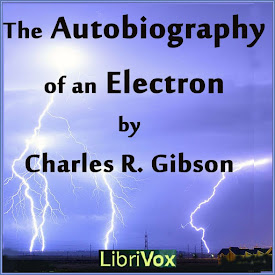 The Autobiography of an Electron

"While many scientific men now understand our place in the universe, we electrons are anxious that every person should know the very important part which we play in the workaday world. It was for this reason that my fellow-electrons urged me to write my own biography. I am pleased to say that my relationship with the scribe who has put down my story in the following pages has been of the most friendly description. I have allowed him to place what he calls "The Scribe's Note" at the beginning of each chapter, but it will be understood clearly that these are merely convenient embellishments, and that I am responsible for the story of my own experiences." (Introduction adapted from the text) (2 hr 31 min)

06 - Man Pays Us Some Attention

10 - How We Communicate with Distant Ships

11 - How We Reproduce Speech

15 - We Send Messages from the Stars

16 - How Man Proved Our Existence

18 - Our Relationship to the Atoms

Author Charles Gibson uses a unique and concise way of introducing this fascinating subject to young readers, or to one of any age for that matter. I have no doubt this work is a classic in education. As everyone else, I knew how useful electrons were for creating light for us and for running our electric motors. However, I did not know how essential they were for the creation and sustaining of life itself. While humans are beginning to understand some essentials of cosmic mysteries, such as electrons, one cannot help reflecting upon and being in awe of the Creator. It is as if some entity, possessed of electrical, mechanical, and chemical engendering so great and so brilliant as to be quite beyond our ability to comprehend, created our universe by design. And then you might ask, “Why?” And the answer is, of course, “For us!” But then when we ponder how dinosaurs ruled the earth for 150 million years, but became extinct 65 million years ago, and how they replaced the “pre-dinosaurs” who were top dog for eons, we have to contemplate that we humans, a mere 100 thousand years old, are most likely going to be extinct ourselves someday. “Humans?” says the electron. “Yes, I remember them, vaguely”. I think they were around for a couple million years way back”, says the electron as he continues to happily go about his business a billion years from now, benefiting new life forms. Reader, Laura Victoria, ranks among the very best of readers.

I highly recommend this book for young learners of science. It explains things in simple terms a child can understand. Laura does an excellent job reading it. Her voice is perfect for the 'voice of the electron. 5 stars for both the reader and the book. Esther - the dedicated proof listener.

An excellent idea. I,myself, as a teacher of chemistry, found it confusing because In trying to make it simpler, it came across as vague.

So many unknown truths.

I feel blessed to have heard your life story this this far, my electron friend.

Well read, can be interesting for children and grown ups - Thank you!

Interesting story. Worth the listen. Thank you reader.