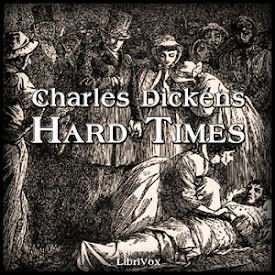 Charles Dickens' 1854 novel opens with the philosophy of education espoused by the eminently practical Mr. Gradgrind, who prizes "facts and calculations." He raises his children, most prominently Louisa and Tom, to eschew imagination and emotion and embrace order and reason. The results are disastrous: Louisa marries out of duty to the supposed self-made man Mr. Bounderby, while Tom grows up dissolute, ultimately commits theft and blames it on an unfortunate laborer, Stephen Blackpool. Set in the fictional Coketown, a mill town in the north of England, Dickens' novel satirizes capitalism, social mobility, class stratification, and Utilitarianism. This dramatic reading of the novel features a full cast of LibriVox volunteers, who lend their voices to Dickens' vibrant comic characters. (Summary by Elizabeth Klett)

Book 1, Chapter 01, The One Thing Needful

Great cast! Well told! There was only one reader whose accent I struggled to understand. Interesting Dickens tale. Not one of my favorites.

It's really good with all the different voices and all. Great job with the compilation of all the voices. Kudos! However, some chapters were incomplete (not too much but still! ) and also they could increase their pace a little bit. But, all in all as the title might suggest not bad, acceptable.

Well read and very good. If one was reading the book it can be quite hard to get the accent and the lisp but it was beautifully done in this audiobook. Book 3, Chapter 9 has a couple of paragraphs missing at the very end though

Not my favorite Dickens. The dramatic reading was interesting, but you can really tell from the audio that the actors were in different locations on different equipment. It would have been awesome had the mixing matched the sound better.

great book . i wrote a similar story in College. People are still robbed of common sense and ignorant of soul. ...tge true meaning of salvation.

Pretty Good! Bitzers voice was extremely annoying though. I love the rest of the voices who are really good voice actors. They made the book very intriguing.

The dramatic reading format was mostly good. It created a strange combination of scents, though. Mr. Gradgrind sounded American and his wife sounded Australian.

Readers were all excellent, very clear and concise. Great story a well!