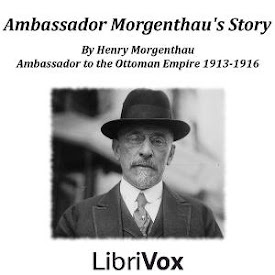 Ambassador Morgenthau’s memoirs of his years in the service of the United States in Constantinople, (today Istanbul), are an important primary historical resource for the study of the dissolution of the Ottoman Empire and the Armenian Genocide. During this genocide, approximately 1,500,000 Armenians living in Anatolia were murdered in an attempt to rid Turkey of its non-Turkish populations. Mr. Morgenthau left Turkey a frustrated man, having done all that he was able through diplomatic circles to halt the murders, to no avail.
Today, Turkey’s official position is that their attempt to annihilate the Armenian population in Turkey was not a genocide. In 2010, the American House Foreign Relations Committee passed House Resolution 252, officially recognizing the Armenian Genocide.
“If we hope to stop future genocides we need to admit to those horrific acts of the past. When Hitler had to convince his cohorts that the world would let them get away with it, he turned to them and said, ‘Who today speaks of the annihilation of the Armenians?’,” said Congressman Brad Sherman, co-sponsor of the resolution. “The last act of any genocide is genocide denial, and the first act of preventing the next genocide is to acknowledge past acts of genocide.” (Introduction by Margaret Espaillat) (12 hr 38 min)

03 - The Personal Representative of the Kaiser

05 - Wangenheim Smuggles the Goeben and the Breslau

06 - Wangenheim Tells how the Kaiser Started the War

08 - A Classic Instance of German Propaganda

10 - Turkey's Abrogation of the Capitulations

11 - Germany Forces Turkey into the War

12 - The Turks and Alien Enemies

13 - The Invasion of the Notre Dame de Sion School

16 - The Turks Prepare to Flee

18 - The Allied Armada Sails Away

19 - A Fight for Three Thousand Civilians

20 - More Adventures of the Foreign Residents

21 - Bulgaria on the Auction Block

22 - The Turk Reverts to the Ancestral Type

25 - Talaat Tells Why he Deports the Armenians

I FOR ONE DID NOT THROW THIS BOOK ASIDE BUT LISTENED TO EVERY WORD, IT PROVED THAT THERE ARE THOSE WHO THINK THAT POWER IS ALL. HOW MANY HAVE FALLEN ON THEIR FACES WHEN TRUTHS COME OUT. I BELIEVE IN GOD OR SOMETHING THAT CAN BE GIVEN THAT NAME. I AM NOT PARTICULARLY INTERESTED IN RELIGION, WE WERE NOT BORN WITH THAT KNOWLEDGE AND AS NOBODY KNOWS ANYTHING, RELIGION IS A DEAD SUBJECT. LOVING, HELPING YOUR FELLOW MAN, GIVING ADVICE AND AID WERE NEEDED IS THE ALL IMPORTANT. MONEY SEEMS TO BE THE OBJECT OF RELIGIOUS ORDERS AND AS SOON AS SOME ARE DISCONTENTED THEY BREAK AWAY AND FORM THEIR OWN GROUPS. WHERE DOES THAT LEAVE RELIGION. FRAGMENTED. THERE IS ONLY ONE RACE AND THAT IS THE HUMAN RACE. PERIOD.

This book was eye-opening to me since I knew almost nothing about this chapter of history. Morgenthau showed amazing wisdom and diplomacy as he tried to prevent harm to others. Again and again he was able to change the intended outcome. But not, alas, for the Armenians, which is the heartbreaking part of the story. Margaret Espaillat is a gifted reader.

I got about two minutes into this thing before I tossed it. Germany was the designated demon du jour in 1918. The Kaiser wants to take over the world bla bla bla. They played martial songs for the canon fodder and told them it was the war to end all wars. War is a racket.

Important document on the Armenian genocide told by a well sourced Diplomate. It's a shame that the current Turkish republic continues the genocide perpetrated by the young turks by its denial. Excellent reading by Ms. Espallat.

Quite informative historical narrative about the underpinnings of WWI & how war & conflicts are brewed by few megalomaniacs that eventually result in massive destruction. The book is also a living document of the atrocities and brutal massacre of the Armenians.