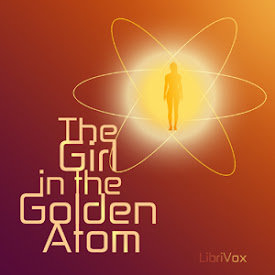 The Girl in the Golden Atom

While examining a golden ring under a microscope, a chemist discovers a sub-atomic world. During his examination of this world he sees a beautiful young girl. After developing chemicals that will allow him to either shrink or grow larger in size, he and three friends journey to this small world. (Summary by Richard Kilmer) (10 hr 55 min)

15 - The Valley of the Scratch

17 - The Welcome of the Master

Refutation of the Accusation of Misogyny, by a Woman and a Feminist

Another reviewer said this book was misogynistic, which is incorrect and unfair. The author definitely has paternalistic views, and they could be termed sexist, but, in fairness, they are really quite progressive for his time. Although women in the atom have mostly traditional roles, they are also jurors, and king's counselors. More importantly Ray Cummings makes a clear stand with women, not just against rape, but against the way a woman is treated after being raped. He states that women who "cry" rape are invariably telling the truth, and he decries victim blaming, victim disbelieving, and victim discrediting. These are feminist attitudes from a man who respects women, not from a misogynist. Below are two excerpts from The Girl in the Golden Atom. Judge for yourself. 1. Utopian ideals - Ch 20: âCrimes against women ... are punishable by death ... in judging these crimes ... A slight chain of proven circumstances and the word of the woman is all that is required. ... Although they know that almost at their word a man will be put to death, practically never, I am convinced, is this power abused." 2. Disintegrating morays - Ch 23: "Crimes against women ... committed by those prominent, or in authority, go unpunished. Women's testimony is discredited, often by concerted lying on the part of men witnesses.â Thank you for reading, I had to set the record straight. By the by, the book is entertaining and enjoyable.

if you can get past the impersonal way in which he regrets to the characters and v his overuse of certain words it's actually a pretty great story, to someone like me ("new" to the work of books) he does a great job of painting a nice picture of a story (the idea of which it's enough to grab anyone's imagination and take off with it) that is similar to something Edgar Rice Borroughs would write although in a slightly less eloquent fashion. Definitely glad i took this on in since I had exhausted all the ERB books on here.

Cracking tale of adventure to a land existing at an atomic level. It must be remembered that this novel was written in 1922 and as such has a style and dialogue very much of the time. The narrator has the perfect cadence for this book. I appreciated how the author created such an unusual premise for a new world and was so creative in its description of the location and the culture and society of the people living there. Most engaging.

It is not mysognyistic enough

As a white male, I realize men are naturally superior to females. I took a break from raping females to listen to this story. I was appalled to find the author allowed the female protagonist to express independent thought. Totally inappropriate. Females should only be depicted making sandwiches and running around hysterically whenever a mice enters the room. Females have no place inside of golden atoms. They should be in the beauty salon or kitchen

from a time when science was explained as best as it could, but with limitless possibilities! I thoroughly enjoyed it! And to the narrator, my hat off to you. Your voice could probably stop a charging rhino!

Very similar to the short story `He Who Shrank ` from The Anthology of Science Fiction. The only other story I have read that follows this theme. Reader a bit mono tone, however the story was very much enjoyed!

Good, interesting, good perspective. did not like the abrupt ending, i kind of wish they went back down into the atom and saw what happened without them..

Wonderful story from a time when reality wasn't so encroaching. Enjoyed from beginning to end and long for more like it. Imagination is a beautiful weapon!