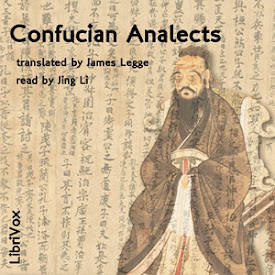 The Analects, or Lunyu (simplified Chinese: 论语; traditional Chinese: 論語; pinyin: Lún Yǔ; literally "Classified/Ordered Sayings"), also known as the Analects of Confucius, are considered a record of the words and acts of the central Chinese thinker and philosopher Confucius and his disciples, as well as the discussions they held. Written during the Spring and Autumn Period through the Warring States Period (ca. 475 BC - 221 BC), the Analects is the representative work of Confucianism and continues to have a substantial influence on Chinese and East Asian thought and values today.

James Legge (Chinese: 理雅各; December 20, 1815 – November 29, 1897) was a noted Scottish sinologist, a Scottish Congregationalist, representative of the London Missionary Society in Malacca and Hong Kong (1840–1873), and first professor of Chinese at Oxford University (1876–1897). In association with Max Müller he prepared the monumental Sacred Books of the East series, published in 50 volumes between 1879 and 1891. (Summary by Wikipedia) (5 hr 34 min)

I’ve owned the paperback of this for a long time and never get around to reading it. I loved the readers pace and pronouncing. Easy to listen and I enjoyed that she read the original text as well as English translation. Thank you Jing Li

Well read, but in Chinese & English.

Easy to understand but the boom takes twice as long roughly to listen to because the reader reads the book both in English and with the original Chinese...

What a privilege to have the original text alongside the translation! Perfectly clear recording, but be sure to pay attention, the chapters move quickly.

Not sure why half is in Chinese but the English parts are well done.

thank you for the time to record this..I have learned much