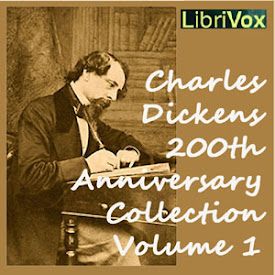 The Charles Dickens 200th Anniversary Collection comprises short works previously unrecorded for LibriVox - fiction, essays, poetry, letters, magazine articles and speeches - and each volume will be a potpourri of all genres and periods of his writing. This first volume was released on Dickens' 200th birthday, February 7th 2012 and further volumes followed during the anniversary year.

Volume 1 includes short stories including, amongst others, The Holly Tree, the first part of Holiday Romance and three pieces from Mugby Junction.

Some items requiring a little further explanation are Prince Bull, written as a fairy tale, but in reality a scathing attack on the Government's handling of supplies to the troops in the Crimean War; Old Lamps for New Ones in which Dickens makes clear his low opinion of the ethos of the Pre-Raphaelite school of painting; and Frauds on the Fairies, a polemic against George Cruikshank's bowdlerisation of fairy tales for moralistic purposes, and the interesting revelation that 'product placement' is by no means a new phenomenon. (Introduction by Ruth Golding) (7 hr 40 min)

The Poor Relation's Story from 'Some Christmas Stories'

Frauds on the Fairies from Household Words Vol. VIII No. 184

Introductory Romance From the Pen of William Tinkling, Esq. (Aged Eight) from '…

Old Lamps for New Ones

A Tale of the Good Old Times

Some Particulars Concerning a Lion from 'Mudfog and Other Sketches'

To be Read at Dusk

The Ghost of the Late Mr. James Barber

The Amusements of the People I

A Walk In A Workhouse from 'Reprinted Pieces'

The Hymn of the Wiltshire Labourers

The Holly Tree, First Branch - Myself