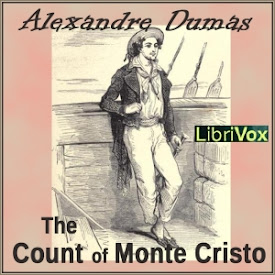 The Count of Monte Cristo (version 2)

The story takes place in France, Italy, islands in the Mediterranean and the Levant during the historical events of 1815–1838 (from just before the Hundred Days through the reign of Louis-Philippe of France). The historical setting is a fundamental element of the book. It is primarily concerned with themes of justice, vengeance, mercy, and forgiveness, and is told in the style of an adventure story. (Summary by Wikipedia) (49 hr 48 min)

Chapter I - Marseilles - The Arrival

Chapter IX - The Evening of the Betrothal

Chapter X -The King's Closet at the Tuileries

Chapter XXI - The Island of Tiboulen

Chapter XXXVI - The Carnival at Rome

Read by A. J. Elliot

Chapter XLIII - The House at Auteuil

Chapter XLV - The Rain of Blood

Chapter LIV - A Flurry in Stocks

Chapter LVII - In the Lucerne Patch

Chapter LIX - The Will

Chapter LXI - How a Gardener May Get Rid of the Dormice

Chapter LXVII - At the Office of the King's Attorney

Chapter LXXVIII - We Hear from Yanina

Chapter LXXXI - The Room of the Retired Baker

Chapter LXXXIII - The Hand of God

Chapter XCVII - The Departure for Belgium

Chapter CV - The Cemetery of Pere-la-Chaise

Chapter CXIII - The Past

Chapter CXVII - The Fifth of October

My husband and I enjoyed the story, but found many of the readers impossible to understand. When seeking volunteers, please keep in mind that very often audio books are listened to in settings with significant background noise, and readers with strong accents or soft, sweet voices are unsuitable for listening while on the treadmill or while traveling in the car. Several times we were forced to read a chapter from the print version or we would have completely lost the thread of the story.

This book is almost ruined by a succession of monotone voices, mispronunciation and heavy accents. I normally love accents but it this case a number of chapters were rendered incomprehensible. Volunteers need to be told to inject a bit of life into their reading and not just get through it as quickly as possible.

Can't understand much of Ch 40

I can't understand the reader in Chapter 40. Her unnecessary quickness of pace combined with her accent and lack of enunciation through detailed parts of sentences, makes this chapter about 25% incomprehensible. Also there is no consistency among the pronunciation of the characters' names or even the author's name! Literally every reader pronounces Alexandre Dumas differently!! So annoying. Quality and consistency of recordings aside, this is a great book!

I've read several reviews about the quality of this recording. People complain about accents improperly pronounced English words at Etc. let me give you my take. People from all over the world have contributed to reading a classic for your and my enjoyment. The fact that some have accents that are unfamiliar to my particular dialect, the fact that there are mispronounced words as it relates to what I believe the way they should be pronounced, all add to the character and the enjoyment. I am working and have had many someones who have taken their time to read this book out loud for my personal enjoyment. How dare I complain. yes there are accents and words that are pronounced not properly compared to an English speaker. Does that make it bad? Absolutely not! I have enjoyed this reading tremendously. Thank you so very much for everyone was willing to take their time to share the reading of this classic with anyone who's willing to pick it up and do nothing more than listen. Kudos and thanks to you all!

Great story, Could not understand narration

Whoever narrates this book mispronounces so many words, even simple ones like flecked and french words like gendarmes. With each proceeding chapter it is increasingly more difficult to comprehend the speech. I've tried to listen to this several times but I had to buy the book in order to understand what was going on. I'd reccomend a new recording so people can enjoy this tale to the greatest extent.

I have no complaints about the story. I have loved it for years. Unfortunately, some of the narrators were quite bad. One was so annoying I almost quit listening. There is another version on Librivox read by David Clarke. I only found it after suffering through 4 1/2 chapters of this. Do yourself a favor and find that one.

I have read this book before, and it is wonderful. I decided to listen to it my second time around and have been disappointed to find that a couple of the readers have heavy accents that make them very difficult to understand. If it were simply accents, that wouldn't bother me, but they are also not good readers in English. I could easily believe that some of these were recorded as part of ESL practice, as the reader not only stumbles over words, but also skips over some words entirely (particularly articles). It's difficult to learn another language, I completely understand that, but I think it's important not to use unwilling people as your practice listeners, and not to record chapters of a book if you are unable to read smoothly and include all the words.

Long book but it was worth it. Most of the readers were easy to listen to. A couple of them were quite annoying to listen to and two or two had accents that made them very difficult to understand.