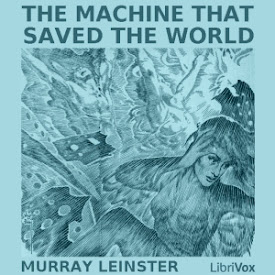 The Machine that Saved the World

They were broadcasts from nowhere--sinister emanations flooding in from space--smashing any receiver that picked them up. What defense could Earth devise against science such as this? In the far future of 1972, on a secret military installation, Staff Sergeant Bellews is an expert on the latest scientific discovery: a way for ordinary machines like vacuums and lawnmowers to gather experience in their jobs, becoming error free over time. Then the strange broadcasts began to blow up transmitters everywhere. Were they from space? Enemies? the future? He didn't care until they started messin' with his machines. Then he took it personally. (summary from the first chapter and Phil Chenevert) (1 hr 36 min)

The Machine that Saved the World

Great read. Fun fast paced with interesting twist to plot and likeable characters with a good climax and unexpected ending... Thanks!

This story has aged well. O.K. - some stuff is just wrong. One of things S.F. stands for is "Speculative Fiction". So they got a few things wrong? They got most of it right. Also, the message of this story is told with out outdate stuff that would get in the way.

this is a rather humorous SciFi with surprisingly some surprisingly modern ideas of future technology even if the technology is explained in a rather ridiculous manner. I tried to discover the year this was published but couldn't find any info online. Great job by Phil Chenevert!

I love early sci-fi, and this is one of my favorite authors. This quick story has a bit of everything: the military guys who don't want the science guys getting in, and don't listen, and the conspiracy plot by foreign powers. The way the hero gets the bad guys is a great bit of twist. Excellent reading too, enjoy!

There was an awful lot of repetition in this short story, particularly regarding the machines. Perhaps the author was excited to prove how special his machines were. Anyhow it spoiled the potential of this otherwise entertaining story. Many thanks to the reader for his excellent narration.

It's early scifi, and has one of the sort of crashing conclusions which seemed so obvious to American writers at the time, but it carries its plot well and the performance is excellent.

The story was confusing and too much "telling" instead of "showing" was done. But the narrator made the best of it to make the story seem exciting at least!

Interesting plot. The reading was not the best or the worst. He modulated his voice but applied sense stress in the wrong places which sounds terrible! It really killed it for me./