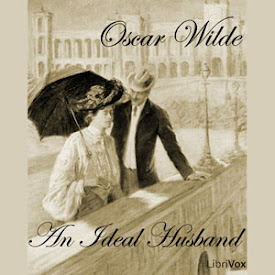 An Ideal Husband is an 1895 comedy by Oscar Wilde which revolves around blackmail and political corruption, and touches on the themes of public and private honor. The action is set in London, in "the present", and takes place within a single day. "Sooner or later," Wilde notes, "we shall all have to pay for what we do." But he adds that, "No one should be entirely judged by their past." (Summary from Wikipedia)

volume is different in each character

I didn't see this as a comedy but as an interesting drama. The moral is to not only tell the truth but to be open. One part did bother me though. Why didn't Goring use his same threat again? It had just worked a minute earlier & would've worked again. I wish I could ask Wilde about it. It's still an enjoyable listen!

Another superior work by Oscar Wilde. The dramatic reading was heartfelt and thoroughly amusing! A worth while read.

The story is beautiful, cheerful and has a sweet happy end. What I disliked was the fact, that the reading wasn't levelled up - some of the recordings are quieter than other and this makes it difficult to just enjoy. Other than that I love it.

One of Wilde's most enjoyable...

It's a great change of pace to hear a play instead of watching it. If only audio was easier to balance between all the readers. Otherwise a great listen.

I am an Oscar Wilde fan... Have lived years in England...find British humor enjoyable... Charming for it's 18 th century mores... Enjoyed this immensely...characters good... Reader excellent

Was a little slow to start and took me a bit to figure out who was who but overall I seriously enjoyed this one.

A fun & funny story with meaningful undertones. I especially like the character of Lord Goring. The readers are also excellent.