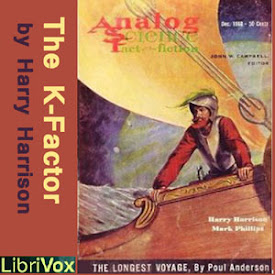 The human race has reached the stars, colonized many planets and done amazing things in all areas of scientific progress. But humans are still humans and remain both honorable and not so honorable; some with high ideals and others with very low ones indeed. So why hasn't war occurred in several centuries among the hundreds of planets? Has man really changed? Not on your life it hasn't! Read how science has given man peace but at what cost? (1 hr 2 min)

I didn’t think the story held together very well; no real character development. The story had no conclusion. What happened to the wounded man, did he really die? When last seen he sounded as if he was ok. Did the killing of the traitor stop the war? How did the protagonist escape the planet? Not one of Harrison’s best.

The story, whether through narration or itself feels very odd with the pace. However, the message in it is very powerful and you still understand what’s going on. Harrison’s capacity to cultivate concepts to his readers is phenomenal. The ending to this story is served in a unique way and it makes you feel better about the actions that take a place earlier in it.

After I got used to his unusual style, Phil Chenevert has become my favorite reader on LibriVox, and he is doing a great job again. The story, however, is one of the weaker ones of Harry Harrison.

Once again a great read

First time to hear Harry Harrison. I have to wonder how much of this trope about interstellar social engineering was common to the Foundation series, or was commonly discussed ?

Only an hour, but it was well spent. It's been a while since I read anything by Harry Harrison, but I will be have to seek some more out now.

A solid five stars. An excellent and thought-provoking story, with a truly science-based.central premise. This is what science fiction is at its best. Well-read, as ever, by the man from Baton Rouge.

The narrator was perfect for this book. I haven't read this author until now, and I think I'll go find more of his work!

Yet another great story

I'm really enjoying every story by Harrison read by Phil. A must listen if you enjoyed his other work.