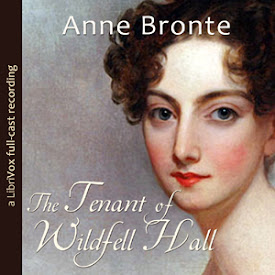 A mysterious young widow arrives at Wildfell Hall, an Elizabethan mansion which has been empty for many years, with her young son. She lives there under an assumed name, Helen Graham, and very soon finds herself the victim of local slander. Refusing to believe anything scandalous about her, Gilbert Markham discovers her dark secrets. In her diary Helen writes about her husband's physical and moral decline through alcohol and the world of debauchery and cruelty from which she has fled. This passionate novel of betrayal is set within a moral framework tempered by Anne's optimistic belief in universal salvation. The Tenant of Wildfell Hall is mainly considered to be one of the first sustained feminist novels. May Sinclair, in 1913, said that the slamming of Helen's bedroom door against her husband reverberated throughout Victorian England. In escaping from her husband, she violates not only social conventions, but also English law. (Summary by Wikipedia)

A story worth listening to. Well read by the several volunteers. Thank you! To my taste the reader of Gilbert Markham pauses a bit too often every sentence, which affects the fluency of the story. But otherwise pleasant to listen to, just as the voice of the other narrator (Helen Graham). Note on the audio editing: not all voices are equally loud.

The readers did an excellent job, the story kept me on edge the whole time !

love the readers and the story

YES, YES AND YES!!! Queen Anne 👑 I like reading classics on the side while I read fiction as it helps keep me out of a reading slump and so I started The Tenant of Wildfell Hall with zero expectations knowing it is by the Brontë sisters and that’s enough. It was so good! The characters were real and flawed. The pacing was amazing until 85% but that is a slight problem. And the plot was filled with soap opera drama. It was crazy how many people drink and cheat in the 18th century. I have so many beautiful quotes that I had to screenshot as there were written in such a simple way but the magnitude of the words are astounding. I can see Withering Heights in the description of the moors and landscape and the hideous characters I can see Heathcliff and Catherine. But alas, I am not here to compare but to appreciate. Unfortunately, Jane Eyre did not click with me, but I will her other works as there is hope.

wonderful reading done by the volunteers. a fine example for any young girl starting out to date, this should be required reading to help with making a wise choice for a marriage mate. & yet it also is a fine example of how serious the bond of marriage should be and to what extent the couple should try to work things out and resolve issues between them (helen tried though failed, & with helens help her friend succeeded in changing her marriage to an assumed abusive husband & that man changed his ways to make the marriage better). its not a book about running out on your marriage when times are hard, but on doing everything reasonable to make it work... and being peaceable to each other when the marriage comes to an end. not being vengeful or going by the saying "whats good for the goose is good for the gander". the last few chapters were a bit long and drawn out, but overall 5 stars.

4* - The book was well read 2* - The story was so long and there were so many characters, that at some point I had just listened to the plot without considering it too much. 1* - I understand that the time was different and that people used to be very religious, but it was too much for me. Helen didn't form one sentence that did not contain some religious observations or some other. But this one is obviously not connected to the reading itself.

This was a bold effort but poor old Markham’s lovely Irish tones were woefully staccato and stilted which became a bit irritating. The voice of Helen was pleasing and bright and the whole assemble is a very magnanimous effort which I am the thankful for save I must suggest the pronunciation of mama in England is mar-mah not maam-a. Still! Bottoms up all - this is a great diversion to listen to and a happy tale in the end. 🥰

The end drags on

The first 1/4 of this book was a bit slow. I enjoyed the next half and the last 1/4 was like slagging through mud. it just went on and on to the point that I began to suspect that Thackeray was getting paid by the chapter. A full 15 chapters could have been cut without any negative outcome for the book. I began skipping around towards the end just to get through it.