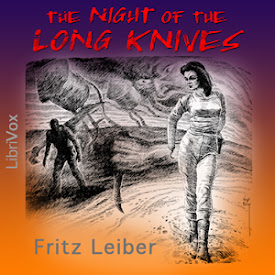 The Night of the Long Knives

"I was one hundred miles from Nowhere—and I mean that literally—when I spotted this girl out of the corner of my eye. I'd been keeping an extra lookout because I still expected the other undead bugger left over from the murder party at Nowhere to be stalking me." In a Post apocalyptic world, the few people left must be strong. And must not hesitate to kill. Of course, killing another Deathlander was one of the chief pleasures and urges of all the solitary wanders in this vast wasteland. Kill and kill again. But this other was a girl and that brought up the second great urge: sex. Which was it to be today? Perhaps both? And who would walk away afterward?(Summary by Phil Chenevert) (3 hr 20 min)

The story was wonderful post apocalyptic. Unfortunately, the narrator made it sound as though it were a children's book. The pace and inflection was simply not a good fit for this story. Like stated above, this is a dark, dystopian tale. The narrator seemed to read it as though it were a comedy. A couple words were mispronounced to the point if ridiculousness. The one that stands out is "almonds" - as in the nut (or seed rather). I hadn't realized that a simple word like that could be butchered so badly. In any case, like I said, it's a great story, but the narrator needs to match his voice to the atmosphere in which the book takes place.

Phil did a great job of reading this. I found the story to have a lot of sarcastic dark humor and he set the tone perfectly

I came for the Fallout style post apocalyptic world, and stayed for the Karma folk tale. Another wonderful narrated story by Mr. Chenevert.

good story and the reader does fit

I liked the twist at the end, and because the characters ended alive and well I don't see this as a real dark and apocalyptic movie as others have argued. At first I was thinking the reader, whom I really like and enjoy, was too soft and not as harsh as he should have been to convey the time for the story, but in the end I think he was a good fit.

I find myself agreeing with a review I saw before listening to this... Phil is a fab reader and I have listened to many of his recordings but this is a dark story and Phil reads it as he did Brer Rabbit, if you know this is coming (as I did) then you know to stick with it and get over it, the book is excellent and worth staying the journey.

I can't really do titles

Very grim but interesting story, offers a unique perspective on post-apocalyptic Earth. Unfortunately, though Mr. Chenevert reads the story at a good pace, his voice and general way of reading makes me feel as if this is something like Alice In Wonderland. It simply doesn't fit with a dystopian suspense sci-fi.

Well, this was okay

It starts out as a strange sort of sci-fi, but got a bit preachy. Post apocalypse earth is apparently all about murder and sex. When you encounter someone, a bit of a dance goes on to determine which is going to happen. Excellent reading, just an odd kind of story.