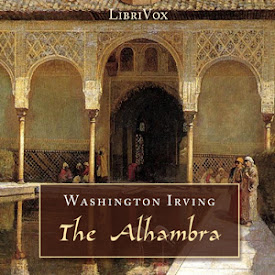 The Alhambra: A Series Of Tales And Sketches Of The Moors And Spaniards

This is a collection of essays, verbal sketches, and stories by Washington Irving. Irving lived at the Alhambra Palace while writing some of the material for his book. In 1828, Washington Irving traveled from Madrid, where he had been staying, to Granada, Spain. At first sight, he described it as "a most picturesque and beautiful city, situated in one of the loveliest landscapes that I have ever seen." He immediately asked the then-governor of the historic Alhambra Palace as well as the archbishop of Granada for access to the palace, which was granted because of Irving's celebrity status. Aided by a 35-year old guide named Mateo Ximenes, Irving was inspired by his experience to write Tales of the Alhambra. Throughout his trip, he filled his notebooks and journals with descriptions and observations though he did not believe his writing would ever do it justice. He wrote, "How unworthy is my scribbling of the place." A commemorative plaque in Spanish at the Alhambra reads, "Washington Irving wrote his Tales of Alhambra in these rooms in 1829". The book was instrumental in reintroducing the Alhambra to Western audiences. (Summary by Wikipedia and David Wales) (10 hr 57 min)

Government of the Alhambra

Interior of the Alhambra

Reflections on the Moslem Domination in Spain

The Alhambra by Moonlight

Inhabitants of the Alhambra

The Adventure of the Mason

A Ramble Among the Hills

The Court of Lions

The Tower of Las Infantas

The House of the Weathercock

Legend of the Arabian Astrologer

Legend of the Three Beautiful Princesses

Legend of the Moor's Legacy

Visitors of the Alhambra

Legend of Prince Ahmed Al Kamel; or, The Pilgrim of Love Part 1

Legend of Prince Almed Al Kamel; Or, The Pilgrim Of Love Part 2

Legend Of The Rose Of Alhambra; Or, The Page And The Ger-Falcon

The Governor And The Notary

Governor Manco And The Soldier

Legend Of The Two Discreet Statues

Mahamad Aben Alahmar, The Founder Of The Alhambra

A wonderful collection of stories, very well read. This is one of my all time favorites that I can listen to again and again.

An awesome book and an awesome reader

A great look at a part of history rarely studied during today's so-called modern education (Yech ! Give me a classical education and the Grand Tour any day. The former results in a boring mind, the later in, at the very least, a mind lyrical in it's infamy.) The reader does a fantastic job with both cadence and pronounciation of both English and Spanish words. Really, an ideal reader for any historical or classical word, refined yet not boring.

As magical as arabian nights

Beautifully read, thank you. This book was my only happiness while I was sick in bed and helped bring my thoughts away from the pain to such enchanting places. I am very grateful

Can't recommend this enough. Finer in spirit and more masterful in execution than the more famous sketch book, this book and its excellent reader delighted me from beginning to end

NOT YOUR NORMAL TRAVELOG

I felt like I was there. Irving can certainly tell a story, and he gets to tell several here. David Wales was the perfect narrator for this book.

Nobody will want to stop listening to this

Just finished this book. Enjoyed the stories and the narrator. Altogether worth my time!!