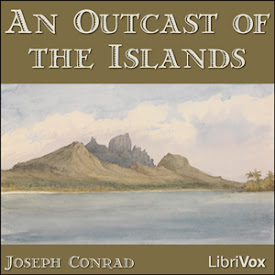 An Outcast Of The Islands

An Outcast of the Islands is the second novel by Joseph Conrad, published in 1896, inspired by Conrad's experience as mate of a steamer, the Vigar. The novel details the undoing of Peter Willems, a disreputable, immoral man who, on the run from a scandal in Makassar, finds refuge in a hidden native village, only to betray his benefactors over lust for the tribal chief's daughter. The story features Conrad's recurring character Tom Lingard, who also appears in Almayer's Folly (1895) and The Rescue (1920), in addition to sharing other characters with those novels. This novel was adapted for the screen in 1952 by director Carol Reed, featuring Trevor Howard as Willems, Ralph Richardson as Lingard, Robert Morley, and Wendy Hiller. (Summary by Wikipedia) (10 hr 47 min)

I keept waiting for something to happen, anything exciting, and finally gave up!!!

An interesting book, richly descriptive, and deeply imbued with the spirit and senses of the jungle, that, in Conrad’s inimitable way, lays out human nature and suffering. It was well read and enjoyable to listen to.

Not a tale I'd listen to again

Tom Weiss is in too much of a hurry. The conclusion was so rushed it blended in with signing off

No Plot! No Climax!

One of the worst books. Almost 11 hours to tell a story that could easily be told in less than 30 minutes.

An Outcast Of The Islands

Very good reading of on of Conrad's less interesting novels, whose story meanders and drags a bit.

very well read, unfortunately the recording quality is somewhat crackly. would give him five stars otherwise.

Gave it up in chapter 3. It could not hold my attention.