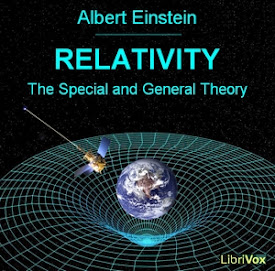 Relativity: The Special and General Theory

This is an introduction to Einstein’s space-bending, time-stretching theory of Relativity, written by the master himself. Special and General relativity explain the structure of space time and provide a theory of gravitation, respectively. Einstein’s theories shocked the world with their counterintuitive results, including the dissolution of absolute time. In this book he brings a simplified form of his profound understanding of the subject to the layperson. In the words of Einstein: “The present book is intended, as far as possible, to give an exact insight into the theory of Relativity to those readers who, from a general scientific and philosophical point of view, are interested in the theory, but who are not conversant with the mathematical apparatus of theoretical physics.” The book is challenging at times but, when approached patiently, proves itself one of the most lucid explanations of Relativity to be found anywhere. [Due to transcription or optical character recognition errors in creating online texts, and because of less-than-clear fonts in some printed texts, the variables as read in some of the equations here are not as Einstein intended. For example, the numeral ‘one’ has frequently been printed and read as the letter ‘I.’ In addition, some equations do not translate well into the spoken word. If you require completely accurate renditions of Einstein’s mathematical formulas, we suggest that you consult a published text.] — Summary written by Kelly Bescherer [and Laurie Anne Walden] (3 hr 39 min)

Part I: The Special Theory of Relativity01. Physical Meaning of Geometrical Pro…

04. The Galileian System of Co-ordinates05. The Principle of Relativity (in the…

07. The Apparent Incompatability of the Law of Propagation of Light with the Pr…

10. On the Relativity of the Conception of Distance11. The Lorentz Transformati…

13. Theorem of the Addition of Velocities. The Experiment of Fizeau14. The Huer…

16. Expereince and the Special Theory of Relativity17. Minkowski's Four-dimensi…

Part II: The General Theory of Relativity18. Special and General Principle of R…

21. In What Respects are the Foundations of Classical Mechanics and of the Spec…

27. The Space-Time Continuum of the General Theory of Relativity is Not a Eculi…

Part III: Considerations on the Universe as a Whole30. Cosmological Difficultie…

I had no trouble hearing and understanding reader. Thank you for taking the time read.

would be LOTS better without reader “Linda Leu”

It’s difficult enough to concentrate on this work without listening a reader with a boring, whispering monotone as is Linda Leu. The chapters read by her definitely need to be redon by a different Reader ,both for continuity and understanding.

This seems poorly read and unnecessarily wordy to the point where it become annoying and difficult to concentrate on the subject matter.

I have read this book myself and it was a fantastic read, but the reader here has no concept of thought or understanding to the words she is reading. It's difficult to understand and almost robotic. it's really a shame. Choose a clearer and slower voice for an enjoyable listen.

I agree with the other reviews. Great book, TERRIBLE voice choice. And not a very clear speaker at all, I had to keep rewinding to catch what she said.

Unless you're willing to record your own version keep your opinions to yourself. God bless those who give us these wonderful gifts.

I rather stab my ears with hot metal as hear that narrator another millisecond.