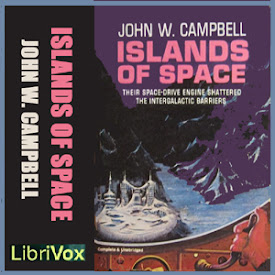 As Earth's faster-than-light spaceship hung in the void between galaxies, Arcot, Wade, Morey and Fuller could see below them, like a vast shining horizon, the mass of stars that formed their own island universe. Morey worked a moment with his slide rule, then said, "We made good time! Twenty-nine light years in ten seconds! Yet you had it on at only half power...." Arcot pushed the control lever all the way to full power. The ship filled with the strain of flowing energy, and sparks snapped in the air of the control room as they raced at an inconceivable speed through the darkness of intergalactic space. But suddenly, far off to their left and far to their right, they saw two shining ships paralleling their course! They held grimly to the course of the Earth ship, bracketing it like an official guard. The Earth scientists stared at them in wonder. "Lord," muttered Morey, "where can they have come from?" (Summary by from the Gutenberg text) (7 hr 0 min)

A great story read by a great reader Mark Nelson , the downside from the 1940's the future seemed to have unlimited possibilities, what happened , where are my intergalactic ships my flying cars and problems that technology can solve ð , only in my dreams.

10,000,000 light years from home and we find our way back with a couple of photographs? I wanted to give the space ship a navigational computer and maybe some coordinates! Other than that the Ancient Mariner rocked the universe! Weapons, metallurgy, and engine power were a 10. Unstoppable power the old school way! The narration was perfect!

enjoyed each and every chapter ,from start to finish. perfect everything about the story..........although i hope another book will come soon,Continuing from arriving at earth with the Metal Giant to introduce to the world.

it's a great book and really good narration, a must read series make sure to look up the author on librivox by the different author spellings below to hear the series what of it thats on librivox --- in addition its rather annoying that : "John W. Campbell", "John Wood jr Campbell", and "John Wood Campbell jr" are all listed as different authors in librivox and they really aren't as far as i can tell since all the books/stories are set in the same world and or series and theme this really does need correction.....

love Mark Nelson reads, but the author's use of the word "apparatus" for everything is way out of hand, the use of the word for everything he can not explain. try being more creative even in his other books this word is overused. if I were to use this as a drinking game for everytime it is used I would never get through a book.

It was interesting. Read like it was written very early in the 20th century - before common knowledge of Venus' uninhabitability. And the work-around for the E=MC^2 problem was very thought provoking & similar to some of my own musings; like it being applicable for a portion of a curve approaching an asymptote.

When the author gets finished with the science and on to the fiction, it's a very entertaining story. The reader does a great job. I would love to hear Mark read the first book in the series (The Black Star Passes)