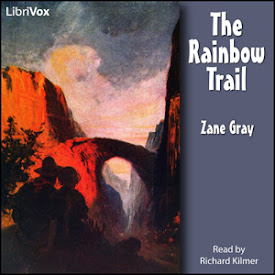 The Rainbow Trail is a sequel to The Riders of the Purple Sage. Both novels are notable for their protagonists' mild opposition to Mormon polygamy, but in The Rainbow Trail this theme is treated more explicitly. The plots of both books revolve around the victimization of women in the Mormon culture: events in Riders of the Purple Sage are centered on the struggle of a Mormon woman who sacrifices her wealth and social status to avoid becoming a junior wife of the head of a local church, while The Rainbow Trail contrasts the older Mormons with the rising generation of Mormon women who will not tolerate polygamy and Mormon men who do not seek it. (Summary Wikipedia) (11 hr 13 min)

12 - In the Desert Crucible

good as I remembered it from my youth

Not as good as the first but still a worth while read.

God bless you Richard for the many hours of hard work and may I say, excellent work and enjoyment, you have brought to many readers . I always wondered why my mother, who died just a few years ago read so many Zane Grey novels. But as a combat veteran and a "so called" American hero I understood why (after listening to you and others who read Zane Grey novels), have never and could never call myself or desire anyone else to refer to me as such. Not in any way do I mean to discredit those who died for all of us, for that is what most combat vets I know call heroes. Even though I won many medal for valor and others in my campaigns of war, I'm nothing compared to the Native Americans and pioneers of the great West, a part of our great country which I have often camped, backpacked and visited in the past few years. I would also like to say to anyone (and I do not mean to be hard) who would allow themselves to offer negative "opinions" about any Librivox volunteer, such as yourself, would not know a hero if he was in his/her own family. All of you who volunteer so much of your time and energy for the benefit of others, are heroes to this veteran. God bless you, Richard, and all Librivox volunteers. The book was excellent as well as your untiring and sincere reading of it were. Thanks again!

The book is not as well paced or intense as Riders of the Purple Sage. Shefford is no Lassiter. He too often gets lost in his own dream world and needs others to snap him out of it. He is more a hero by accident and by the setup by others. I was sorry that Lassiter was portrayed as old and frail. I was hoping for at least one good gunfight where he could shine. I thought Fay Larkin was portrayed well, (wished she had really done the deed). Jane Withersteen was portrayed as just a shadow of her former self. I thought the new generation of Mormons and the exploited Indians were also well protrayed.

WESTERN HEROES SHOULD NOT BE INTROSPECTIVE

The descriptions of the canyons and rivers are obviously made from much personal observation of same. They also are unexcelled in vividness; I can see them perfectly. I agree with Gingerspice, the hero is too indecisive for my view. Also, it seems that Lassiter and Jayne aged 25 years while Faye only aged 10 or 12. A note to Hellodie--true western tales were usually related in low, matter-of-fact tones. Kilmer does it perfectly. Be sure that you have read "Riders of the Purple Sage" before reading this one.

Remembrance of the West

I Love the descriptive color of details that bring the scenes alive. The depth of the characters come alive as though you've known them. You can't help but be drawn in emotionally to the angst and drama of the experience. Zane shows respect to historical detail of the native Indian and reality of the people. The real grit and dirt as it was. Over it all the beauty of the desert country and its grandeur. I am glad to have read both this and Riders of the Purple Sage.