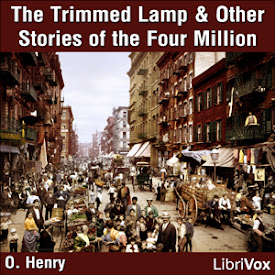 The Trimmed Lamp: and other Stories of the Four Million

Born in 1862 and died in 1910, O. Henry’s birth name is William Sydney Porter; however, he adopted the pen name O. Henry while in prison. He published 10 collections and over 600 short stories during his lifetime.

The Trimmed Lamp follows The Four Million and provides another series of short stories that take place in New York City in the early years of the 20th century and are representative of the surprise endings that popularized O. Henry’s work. They also capture his use of coincidence or chance to create humor in the story. O Henry wrote about ordinary people in everyday circumstances. He is quoted as once saying, “There are stories in everything. I’ve got some of my best yarns from park benches, lampposts and newspaper stands.”

I hope you enjoy the following readings as much as I enjoyed recording them.

The Rubaiyat of a Scotch Highball

The Assessor of Success

The Buyer from Cactus City

The Badge of Policeman O'Roon

The Making of a New Yorker

Vanity and Some Sables

The Guilty Party - An East Side Tragedy

According to Their Lights

The Count and the Wedding Guest

The County of Elusion

The Ferry of Unfulfillment

The Tale of a Tainted Tenner

I enjoyed listening to these O. Henry stories; there were several I hadn't heard before. The reader was adequate – very clear – but occasional mispronunciations (e.g., “egregious” and “Scheherazade”) tended to break the spell of the story.