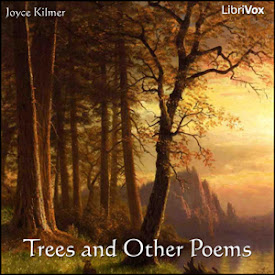 Trees and Other Poems

"I think that I shall never see, a poem as lovely as a tree; A tree whose hungry mouth is presd against the sweet earth's flowing breast ...".

Almost all of us, including myself of course, have heard and enjoyed those famous words which begin Kilmer's poem, Trees. There is even a National Forest in the United States named in honor of this poem. Here is a recording of the entire book of poems in which it was first published in 1914. Joyce Kilmer was an American writer and poet mainly remembered for this short poem but he was a prolific poet whose works celebrated the common beauty of the natural world as well as his Roman Catholic religious faith, Kilmer was also a journalist, literary critic, lecturer, and editor. While most of his works are largely unknown, a select few of his poems remain popular and are published frequently in anthologies.

At the time of his deployment to Europe during World War I (1914–1918), Kilmer was considered the leading American Roman Catholic poet and lecturer of his generation, whom critics often compared to British contemporaries G. K. Chesterton and Hilaire Belloc . He enlisted in the New York National Guard and was deployed to France with the 69th Infantry Regiment (the famous "Fighting 69th") in 1917. He was killed by a sniper's bullet at the Second Battle of the Marne in 1918 at the age of 31. He was married to Aline Murray, who later became a poet and author in her own right, with whom he had five children.(Summary Wikipedia and Phil Chenevert) (0 hr 49 min)