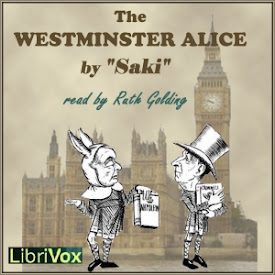 Published five years before John Kendrick Bangs had the same idea with Alice in Blunderland, Saki, in his 1902 series of satirical articles, takes an Alice in Wonderland view of British politics, which Alice finds even stranger than events in Wonderland.

In all honesty, owing to its extremely topical nature this political satire hasn't worn well, which explains why it has virtually sunk without trace. To appreciate it at all, it's really rather necessary to understand the topical references. I am no historian, least of all a political historian, but I have researched it as well as I can, and made some notes in an attempt to put the events and characters into their political context for the listener. My notes may be found on the Internet Archive in audio form or in text form.

I hope that this may still appeal to the political sceptic of today. With some basic understanding of the situation, I found the satire bitingly keen at points, and was left with the feeling that some aspects of British politics have changed little in more than a century, although current political satire sadly lacks Saki's wit. As the Red Queen says: "I don't know what business you have here, if you don't belong to the Cabinet; of course... there are so many of them, and they're mostly so unimportant that one can't be expected to remember all their faces." (Introduction by Ruth Golding) (0 hr 55 min)

04 Alice and the Liberal Party

05 Alice Anywhere BUT in Downing Street

10 Alice Has Tea at the Hotel Cecil

11 Alice Goes to Chesterfield, The Aged Man, Spades in Wonderland