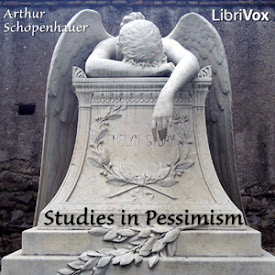 Arthur Schopenhauer, an early 19th century philosopher, made significant contributions to metaphysics, ethics, and aesthetics. His work also informed theories of evolution and psychology, largely through his theory of the will to power – a concept which Nietzsche famously adopted and developed. Despite this, he is today, as he was during his life, overshadowed by his contemporary, Hegel. Schopenhauer's social/psychological views, put forth in this work and in others, are directly derived from his metaphysics, which was strongly influenced by Eastern thought. His pessimism forms an interesting and perhaps questionable contrast with his obvious joy in self-expression, both in the elegance of his prose and in his practice of playing the flute nightly.

His brilliance, poetry, and crushing pessimism can be seen immediately in this work, as for example in this claim from the first chapter: "The pleasure in this world, it has been said, outweighs the pain; or, at any rate, there is an even balance between the two. If the reader wishes to see shortly whether this statement is true, let him compare the respective feelings of two animals, one of which is engaged in eating the other." We see also, in this work, his misogyny, as for example in his claim that "as lions are provided with claws and teeth, and elephants and boars with tusks, . . . so Nature has equipped woman, for her defence and protection, with the arts of dissimulation; and all the power which Nature has conferred upon man in the shape of physical strength and reason, has been bestowed upon women in this form." Given his opening comment, the translator, T.B. Saunders, seems to have been at least somewhat sympathetic to this perspective. - Summary by D.E. Wittkower (3 hr 25 min)

On the sufferings of the world

On the vanity of existence

The reader captures the brilliant and biting, hateful and inspired tone of the original. For the first time I was able to picture Schopenhauer the man, a man with issues--with women, with noise, with religion, with life itself. Much food for thought here.

Answers the questions that perplex and frustrate us in private, yet cannot be clothed into proper comprehensible questions. Even if they could be so clothed, one would still not ask or speak of them for fear of coming across as depressed, pessimistic, "Negative" which are anathema to the current world which thrives on cute cat videos and caramel popcorn munching, muscle flexing gym selfies, "yoi go girl/boy" memes and motivational podcasts.

very enlightening of one's view in different subjects on a general explanation. details were not employed deeply. but overall we'll written.

I literally searched for the reader on Facebook and begged him to read The World as Will and Representation. He also read Twilight of The Idols. He is the best vokce for Nietzsche and Schopenhauer.

schopenhauer is a true existentialist

very different from the teachings of nietzsche, schopenhauer offers no alternative for the meaningless because to him there is none. the audio was well done also.

thanks again to librivox

i very much enjoyed d. e. wittkower's reading of this thought-provoking and amusing work

Gets down to some really important aspects of the human condition.

Excellent work and bang up narration! Grock it and send 'em a pocketfull of shekels! Nothing finer! Oh, and be an epic rent and turn off your children's tell-lie-vision and black screen, hypno programming devices, pop some corn, and listen with your children! They'll hate you now but respect you-and themselves-years down the road! G.K. Chesterton, Mencken Nietzsche, Wodehouse, and more are equally epic! They won't learn this in public school-guaranteed! Don't squander yourself and your family's time. The world is getting tougher and meaner! Be prepared. Forewarned is forearmed!