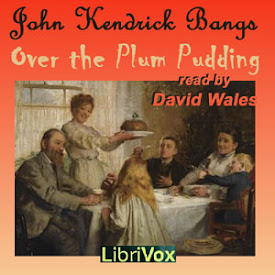 Over The Plum Pudding

Great Caesar’s ghost and shades of A Christmas Carol! Stories – some ghostly, some Christmas, some humorous, some all three -- twelve of them by a master story teller and humorist of the late nineteenth and early twentieth centuries. (Summary by David Wales) (4 hr 30 min)

03 The Flunking Of Watkins's Ghost

04 An Unmailed Letter; Being A Christmas Tale Of Some Significance

05 The Almalgamed Brotherhood Of Spooks; A Letter To The Editor

08 The Affliction Of Baron Humpfelhimmel

10 How Fritz Became A Wizard

11 Rise And Fall Of The Poet Gregory

12 A Tale Of A Pirate Ghost, Found Floating In A Water-bottle

Bangs is always a delight!

A certain reviewer who tells those of us who read reviews to keep in mind that the majority of people alive during the time this collection was penned, had, so to speak, incorrect thoughts. This, then, reveals defects of said people of said time including, for example, those of moral, if one is a believer in such things as morals; mental, which does indeed lead us down quite the slippery slope of sorts; physical, as one cannot wonder at just how often those people had their noggins knocked about as infants or had them drenched in the various snake oils sold to unsuspecting mothers-to-be of such an incorrect period in time that the rest of the people witnessing such things would even allow them to occur; as well as those of physical in nature as related to the mental deficiencies of that incorrect social construct known as the majority. This reviewer reminds that reviewer that our contemporary thoughts are also incorrect as inductive logic dictates. That is to say, in ~100 years our societal majority of persons will be scoffed at, reviled, and generally nauseate some future reviewers of our contemporary literature to degree so great that the majority of their own society must also harbor incorrect thoughts and utter incorrect words.

Over The Plum Pudding

A Nice Set of Stories

A nice set of stories. Some are quite witty. 2 mention negros. You'll need to remind yourself that this was written in a different era when the mindset of the majority was wrong.