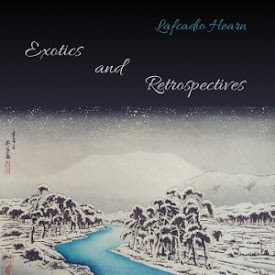 Lafcadio Hearn, born 1850 in Greece, went to Japan when he was 40 years old and became a Japanese citizen only 6 years later. His writings about Japan from the beginning of the Meiji era, when the country was just opening to the West, remain among the most important explanations of Japanese culture.
This book contains in the first part, "Exotics", his observations of and personal insights into Japan. For example, Fuji no Yama tells about him climbing the highest mountain in Japan; and A Question in the Zen Texts, Literature of the Dead, and Of Moon Desire try to explain Buddhist teachings. In the second part, "Retrospectives", Hearn leaves both Japan and his vantage point as impartial observer behind and delves into personal experiences and musings that occurred to him in the numerous countries he visited. The main topic of these very personal pieces is beauty in all its forms. (Summary by Availle) (5 hr 32 min)

III A Question in the Zen Texts

IV The Literature of the Dead, Part 1

IV The Literature of the Dead, Part 2

A collection of very introspective pieces by Lafcadio but not as insightful as his other works highlighting Japanese culture and history. However the first chapter on climbing Mt Fuji is a thrilling piece of writing.