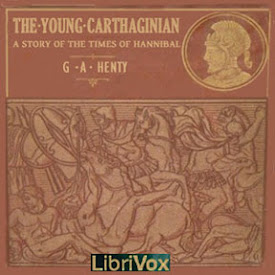 Typically, Henty's heroes are boys of pluck in troubled times, and this is no different. Detailed research is embellished with a vivid imagination, especially in this novel set in the Punic wars, about which knowledge is limited: "...certainly we had but a hazy idea as to the merits of the struggle and knew but little of its events, for the Latin and Greek authors, which serve as the ordinary textbooks in schools, do not treat of the Punic wars. That it was a struggle for empire at first, and latterly one for existence on the part of Carthage, that Hannibal was a great and skilful general, that he defeated the Romans at Trebia, Lake Trasimenus, and Cannae, and all but took Rome, and that the Romans behaved with bad faith and great cruelty at the capture of Carthage, represents, I think, pretty nearly the sum total of our knowledge. " (from the preface)

A Camp In The Desert

A Campaign In Spain

The Siege Of Saguntum

The Passage Of The Rhone

The Battle Of The Trebia

The Battle Of Lake Trasimene

In The Dungeons Of Carthage

A little slow at the beginning, but this is probably one of Hentys best books (at least in my opinion, and I have read most of his books)

The author's genius is manifested in this masterly piece of writing.

Another great GA Henry story, but the narration is poor in parts.