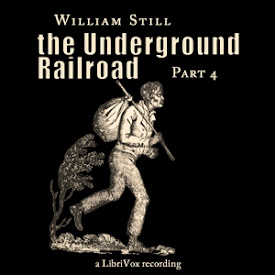 "The work is intensely interesting. Many of the narratives thrill the reader through and through. Some of them awaken an indignation, a horror, or a sense of humiliation and shame that makes the blood curdle or the cheek flush, or the breathing difficult. The best and the worst sides of human nature are successfully exhibited. Here heroism and patience stand out transfigured; there selfishness and brutality hold carnival till it seems as though justice had been exiled and God had forgotten his own. The number of cases reported is very large, and the method in which the author has done his work is commendable. There is no rhetorical ambition. The narratives are embodied in plain language. The facts are left to make their own impression, without an attempt to embellish them by the aid of imagination." From the "Morning Star," Dover, New Hampshire.

William Still is often called the Father of the Underground Railroad. Over 14 years, he helped hundreds of slaves escape to freedom in Canada. Still was committed to preserving the stories of the bondmen and he kept careful records of the many escaped slaves who passed through the Philadelphia “station”. The Underground Railroad was published in 1871 from Still’s records and diaries. In bringing you these stories, Librivox volunteers are reading from the 1878 edition. (Summary by MaryAnn)

Arrivals from Belleair and Maryland

Arrivals from New Market and Virginia

Arrivals from , Richmond, Norfolk, VA and from Near Baltimore

Arrivals from the Old Dominion

Arrivals from Maryland, District of Columbia and Honey Brook Township

Arrivals from Alexandria, VA and the Seat of Government

Crossing the Bay in a Skiff

Sundry Arrivals in 1859; Arrival from Richmond

Arrivals from Delaware and Richmond

Arrivals from Maryland, Virginia and the District of Columbia; Sundry Arrivals …

Arrival from Maryland; Sundry Arrivals from Virginia, Maryland and Delaware

Sundry Arrivals From Maryland; Arrival from Virginia and Baltimore

Crossing the Bay in a Batteau; Arrivals from Dorchester County and Maryland

Twelve Months in the Woods; Arrival from Maryland; A Slave Catcher Caught in Hi…

Kidnapping of Rachel and Elizabeth Parker, Murder of Joseph C. Miller, in 1851 …

Arrival of Fifteen from Norfolk, VA

Helpers and Sympathizers at Home and Abroad – Interesting Letters, Part 1

Helpers and Sympathizers at Home and Abroad – Interesting Letters, Part 2

Letters to the Writer

The whole work is fascinating. I had to keep listening to honor those who took their destiny in their own hands and those brave souls who aided them at their peril. The readers were one and all wonderful.